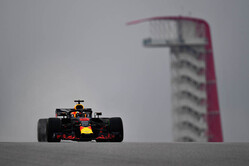 The conundrum facing the teams this weekend is that today and tomorrow are going to be wet, while Sunday will be dry. To further complicate matters, the teams do not have enough wets for two days running.

Earlier today, it's fair to say that the weather was almost Biblical, with great dark clouds, heavy rain and lightning raking the sky... all that was missing was the frogs and locusts.

There are two reserve drivers on duty this morning, Sean Gelael replacing Brendon Hartley at Toro Rosso and Lando Norris replacing Stoffel Vandoorne at McLaren. Nicholas Latifi was scheduled to drive the Force India but the Canadian will now drive at Abu Dhabi instead.

Though the rain has stopped there remains a lot of standing water, and with the session declared wet, full wets and Inters will be the order of the day.

The lights go green and Ericsson is first out, the Swede sporting full wets. Shortly after, Norris heads out to join him, followed by Hulkenberg, Magnussen and Gelael.

More and more drivers head out, including the likes of Vettel and Hamilton, each completing the one installation lap before heading back to the warmth of the garage.

Honda reveals that both drivers will be running new power units this weekend, following issues that arose post-Suzuka. This, of course means grid penalties.

Hulkenberg heads out again, this time sporting the Inters.

The Bulls, Perez, Alonso and Leclerc are the only no-shows.

Alonso heads out on full wets, the Spaniard having witnessed Hulkenberg's struggles on Inters.

18 minutes in and Perez heads out on Inters. A lap later he heads back in.

As the Mexican is wheeled into his garage, Ricciardo heads out on Inters, leaving Verstappen and Leclerc as the only drivers yet to appear. That said, moments later the Dutchman heads out.

Ricciardo posts the first time of the weekend, the Australian crossing the line at 1:55.266, shortly after teammate Verstappen posts 53.644.

Ricciardo subsequently improves to 51.512, which means we should see some of the other drivers head out soon.

A number of teams have brought updates this weekend, most notably the two Italian teams, but they are unlikely to make much of an impact in these conditions.

As the Bulls continue to trade best times, Magnussen and Bottas head out.

As Bottas splashes his way around the track, the cameras pick up on Hamilton making his way to the Mercedes hospitality unit.

Vettel heads out, the German running the old floor, while teammate Raikkonen is running the new version.

Out come the yellows when Leclerc goes off at T8 and takes a trip through the gravel, shortly after Vettel makes a mistake at the hairpin.

Shortly after the session is red-flagged in order that the gravel deposited on the track by Leclerc can be cleared, nonetheless a number of drivers are confused as to why the session needed to be stopped.

The session resumes and Hamilton is among the first out. Straight out of the box the Briton goes third with a 50.015.

Bottas was on the verge of improving before the red flag, the Finn having gone quickest in the first two sectors.

Verstappen improves to 48.847 to go second, but is demoted when Hamilton goes quickest with a 47.502.

Now down in 19th, Vettel heads out again. Teammate Raikkonen is currently fifth. The German subsequently posts 50.688 to go sixth.

Though it has long since stopped raining, the track remains very wet, and as a result a number of drivers are still having moments, not least Verstappen as he runs wide in T16, which has had a kerb fitted on the outside following his antics last year. A few expletives from Raikkonen also as the Finn claims he nearly hit a Williams.

In the pits, the jack-man at Force India does well to avoid Ocon as the Frenchman struggles to stop on entering his pit slot for a practice pit stop. "Sorry about that," says the youngster.

Vettel runs wide at T11, as Hamilton joins Toto Wolff at the monitor in the Mercedes garage.

"Fronts are dropping off, rears are OK," reports Vettel, "happy to try another one."

Along with Gelael, the Williams duo are firmly rooted at the bottom of the timesheets, both over 4.3s off the pace.

"The advantage that Hamilton holds coming towards the end of FP1 is a mammoth 1.3 seconds, with everyone on intermediates," says Pirelli. "Ominous for his rivals." Indeed.

As we remarked earlier, with wet and Inters limited, drivers are limited in the amount of running they can do, pace-setter Hamilton having only completed 6 laps. Bottas has completed 7 and the Bull duo nine apiece.

A little silliness as Ocon isn't too happy about being passed by Raikkonen.