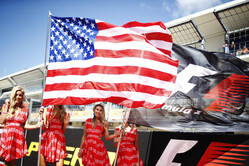 Rather than a belated birthday present, the addition of kerbs at Turns 16 and 17 at the Circuit of the Americas are intended to curb Max Verstappen's enthusiasm, that particular spot being the one the Red Bull driver cut last year in his desperation to pass Kimi Raikkonen - the Dutch youngster learning of the 5s time penalty he had incurred for the move - and which emoted him to fourth - just moments before he stepped out on to the podium.

The kerbs are 2m long, 1m wide and 50mm high and along with the three bumps similar to those on the exit of Turns 11, 15 and 19 that have been installed behind the exit kerb at Turn 1 - also to prevent drivers exceeding track limits - are the only changes to the Austin track ahead of this year's race.

The second zone's detection point is the same as last year, 65m after Turn 18, with the activation point being 80m after Turn 20, on the start/finish straight.

Pirelli, which is the title sponsor of the event, is bringing the soft, supersoft and ultrasoft compounds, the same three that kicked off the season in Australia and has been seen together at three more races since (in Azerbaijan, France and Austria).

The anti-clockwise circuit contains a wide variety of very different corners - most of which reflect legendary turns at circuits such as Silverstone, consequently the right set-up is invariably a compromise. Indeed, the uphill and then downhill hairpin that forms Turn 1 is all about getting the braking right is extremely challenging, while three long straights can cool the tyres on each lap, meaning keeping them in the right operating window is essential.

Lewis Hamilton won for Mercedes last year with a one-stopper, the Briton's fifth win at COTA, while Ferrari's Sebastian Vettel was second on a two-stopper. Throughout the field, there was a mix of one-stop and two-stop strategies.

The undulating nature of the track means that engine speeds and turbo rotation vary constantly, and settings must be constantly adjusted to give optimal performance.

After the first corner the driver goes back up through the gears to reach seventh for turns 2, 3 and 4, which are taken flat out with an average speed of 168 mph (270kph). Similar to Maggots and Becketts at Silverstone and the Esses at Suzuka, consequently the driver needs to be precise on the throttle and carry the speed all the way through rather than brake and accelerate. The power unit needs to be correspondingly smooth throughout the turns, delivering constant levels of torque.

The low ambient humidity of the Texan grasslands has a big effect on the power units, the air will contain more oxygen and the ICE will generate more power, but the aridity is taxing on the internals meaning the teams have to watch ignition timing closely.

Similar to Abu Dhabi, the longest straight is not the pit straight, it is the burst between turns 11 and 12. Here, the car will be at full throttle for almost 12secs. It will also spend over two seconds at maximum velocity at the end of the straight where the driver will brake heavily for the hairpin so rear-end stability and stability under braking will be crucial.

Lewis Hamilton is the most successful driver at the US GP. He is also the only driver to win the race at more than one venue, with a victory at Indianapolis, in 2007 with McLaren, and five of the six races held at COTA to date, once with McLaren in 2012 and with Mercedes from 2014 to 2017.

Two of the current grid made their F1 debut in the USA. Sebastian Vettel appeared for BMW-Sauber in 2007, as a replacement for the injured Robert Kubica, and Toro Rosso gave a debut to Brendon Hartley last year.

Vettel is not the only world champion to have started his F1 career at the US GP: Mario Andretti (1968), Jody Scheckter (1972) and Mika Hakkinen (1991) also took their bow here. Interestingly, Andretti had participated in qualifying for the Italian Grand Prix earlier in the season - but was subsequently banned from taking part in the race, having attempted to return to the US to contest a dirt track race (the Hoosier Hundred) between qualifying and the grand prix.

Pierre Gasly, Sergey Sirotkin and Charles Leclerc race at COTA for the first time this weekend.