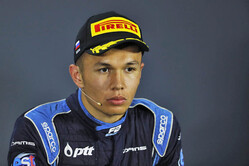 With Helmut Marko stating that Brendon Hartley's hopes of retaining his seat at Toro Rosso depended on him beating teammate Pierre Gasly, though the kiwi's chances were boosted when he qualified sixth in Japan - ahead of the Frenchman - both finished well outside the points the following day.

While it is looking increasingly unlikely that Hartley will not be retained, it has to be said that Toro Rosso no longer has the great pool of talent from which to choose that it used to have.

Indeed, Marko has made no secret of the fact that he would sign Esteban Ocon in the proverbial heartbeat, providing the Frenchman severs all ties with Mercedes.

Now, according to reports, Alexander Albon, who looks likely to finish runner-up to Williams-bound George Russell in the F2 championship, is in talks to partner Daniil Kvyat at Faenza next year.

Having made the decision in the summer to move to Formula E with Nissan for the forthcoming season, the Thai-British driver, seeing no realistic opportunities in F1, did not attend the opening day of the electric series test at Valencia yesterday amidst rumours that Helmut Marko is seeking his release from the Nissan deal.

Backed by Red Bull while in karting and Formula Renault, he was subsequently dropped. However, in a tale somewhat similar to that of Hartley, who was also dumped from the Red Bull programme, Albon found redemption in the form of finishing runner-up to Charles Leclerc in GP3 in 2016, and this year's F2 assault which has seen him claim four wins and leaves him 37 points adrift of Russell with just the Abu Dhabi rounds remaining.