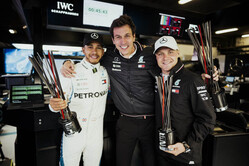 Remember the anticipation ahead of the introduction of the 2017 regulation changes, and the subsequent gradual realisation and disappointment that in reality pretty much nothing had changed.

Well, Mercedes boss Toto Wolff claims the swathe of regulation changes for 2019, will really shake up the order... sort of.

With the levelling of the playing field courtesy of evening out the prize money and scrapping the various bonuses currently on hold, Chase Carey slowly realising exactly what he and his team have bitten off, hopes for shaking up the order seems to rest on tinkering with the technical regulations, though the engine formula is currently looking to remain pretty much as is.

Next year, not for the first time, the sport introduces a swathe of regulation changes aimed at improving the racing and hopefully levelling the field, including a wider, deeper, more simplified front wing.

Despite his team having won 73% of the races since the hybrid engine formula was introduced in 2014 and winning every driver and team title, Toto Wolff would have us believe that the 2019 changes might yet see the mighty Mercedes toppled.

"I think that the biggest impact will be the completely new aerodynamic regulations," he says, according to Motorsport.com, when asked about 2019.

"That will change everything upside down," he added. "Somebody might find a loophole or an innovation or understand how these cars work earlier than others.

"I think there's a big, big variable in those regulations next year, and we could even have teams being right up there that are not on the radar today."

Asked if Red Bull, will be more competitive with its new engine partner, he was equally enthusiastic.

"Yeah, it could well be," he replied. "Because we've seen there's no more pattern anymore, there's not one team that dominates one kind of circuit. It has changed, and the Honda engine certainly looks very powerful now, and Red Bull is a good group of racers."

And we thought his background was in investment companies rather than PR and marketing.