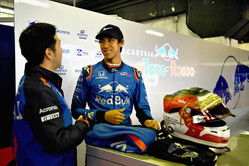 Having made four FP1 outings with the Faenza team last year, and taken part in both the post-Spanish and post-Hungarian Grands Prix tests, Sean Gelael will be back behind the wheel of the STR13 this weekend when he takes part in FP1 in Austin.

"I am super happy and excited to get things rolling again," he said. I did FP1 in Austin last year so it's a track that I know, even though it was a bit damp last year! The last time I was in the car was for the Budapest test, so I'm looking forward to working with the team again, hopefully they're excited as well. The form Toro Rosso is in after Japan is quite strong so hopefully we can keep this momentum going."

Pierre Gasly: "The first time I went to the USA was a long time ago for a karting race at Las Vegas, where I finished third. More recently, I have come to Austin as a third driver for Red Bull Racing but I've never driven the track there, so this will be my first time. It looks like a really technical track and most drivers reckon it's one of the best of the year. I'm looking forward to my first race weekend there. Last year, I would have been racing in Austin, but it clashed with the final round of the Super Formula Championship at Suzuka in Japan. I had a chance of winning that, but the race was cancelled because of the bad weather: so it wasn't the best weekend for me… We saw in qualifying in Japan that our car has made a good step forward and our pace was good in the race, so we have made real progress and I hope that continues in the United States and Mexico."

Brendon Hartley: "It's one year on since I made my Formula 1 debut in the United States GP. I'm very excited to be going back to Austin because it's a city I love and a track I enjoy. We go there off the back of a really positive qualifying performance in Japan, which showed we have clearly made some steps forward and I think we will be aiming for another good qualifying performance, this time with some points on Sunday. The anniversary of one year in Formula 1 is a small milestone and it marks the first time this season that we come to a track that I have already driven in a Formula 1 car.

As for the circuit itself, for a new track it has a lot of character, with plenty of undulation, a very quick first section which has some similarities with the "snake" in Japan. I'll never forget driving a Formula 1 car for the first time, going through that section and having my neck almost ripped off from left to right! It's one of the most impressive sectors on the F1 calendar. The whole track has a very bumpy surface and it's very technical."

Toyoharu Tanabe, Technical Director, Honda F1: "After a very busy and in several ways encouraging home grand prix, we now tackle a pair of back-to-back races in North America. The US Grand Prix is popular with everyone in F1, as it is an interesting track and the sport always gets a warm welcome from the American fans. It can provide entertaining racing, as seen last year when there were 43 passing moves.

"The Circuit of the Americas is a technically demanding circuit with several gradient changes, including the very steep climb to Turn 1 along with a mix of slow, medium and high speed sections. Therefore it provides an interesting challenge on the chassis and aero front and also on the PU side, as we adjust our energy management accordingly.

"Personally, I am looking forward to returning to the USA, where I have many friends and former colleagues, as I worked there for several years on Honda's Indycar project, before joining the F1 program at the end of last year."