Wolff: The battle is far from over 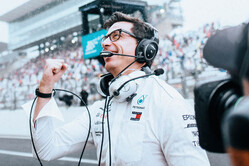 Though Lewis Hamilton can secure the title this weekend in Austin, Toto Wolff is taking nothing for granted.

"We could not have asked for a better result from the back-to-back races in Russia and Japan," says the Mercedes boss. "We were able to extend our lead in both championships and the entire team delivered to a very high level.

"While we didn't have the fastest car in the summer, we've seen the performance swing in our favour recently; however, it is closer than it looked in recent races," he insists.

"Ferrari have a strong car and they will keep on pushing until the very last corner in Abu Dhabi. They have been worthy opponents in the past 17 races and we have no reason to believe that this will change in the next four; just like us, they will fight fiercely for every point and position.

"Two 1-2s in a row also show how well both drivers are performing. With six race victories in the last seven races, Lewis has shown what a class act he is. Both on and off the track he is more complete than ever before, showing commanding performance in the car and challenging the entire team to perform to higher levels at the same time.

"Valtteri had some tough races in the summer, but came back strong in recent weeks. He was competitive in both Sochi and Suzuka and embodied our team spirit. We're lucky to have this driver line-up and we know can count on them as the season comes to its close.

"The battle is far from over, so we approach Austin the same way as every other race: take it one step at a time, focus on our job and make sure we bring performance and reliability to the track. The Circuit of the Americas has been a good track for us ever since it was introduced in the F1 calendar, but past results have no impact on the current championship.

"Everyone in the team knows that we cannot take anything for granted, so we will be as diligent as ever, keep our heads down and work hard to get a good result in Texas. This championship fight has been exhilarating and we can't wait for the next chapter in the epic battle of silver and red."