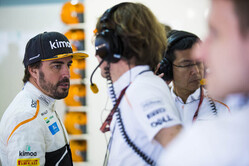 Fernando Alonso: "I'm very happy to go back to the US. I obviously raced there in January at Daytona, and then I went to Barber in Alabama a few weeks ago for the Indycar test. Now, I'm going to another circuit - one of my favourite ones, Austin - for the last time in Formula 1 in the US.

"I'm ready to enjoy the magic atmosphere there. For me, it's always very nice to race in front of the American fans. Hopefully we can get back into the points that we need for the constructors' championship, to help the team and to give us a boost in motivation.

"We had a good race in Singapore a few weeks ago, but we weren't in the points in the last two races, so in Austin we want to change that. It's going to be a fun weekend and I'm also looking forward to seeing a lot of friends there."

Stoffel Vandoorne: "I'm really looking forward to heading back to the US. I'm a big fan and have been spending more and more time there recently. Austin is a really cool city and every year I spend time with the team exploring and trying out cool restaurants. You can't go to Austin and not have Texan barbecue!

"I also really like the COTA track. It has a great mix of corners and is fun to drive. The fans too are really enthusiastic and we seem to have bigger and noisier crowds every year we go there.

"It's tricky to make predictions, but this track will hopefully be a bit more favourable to our car. The last couple of races have been difficult for us but we hope that in Austin we'll be able to show a bit more performance."

Gil de Ferran, Sporting Director: "Although Austin is a relatively new grand prix, it's already become one of the preferred stops on the Formula 1 calendar. The circuit itself not only provides an interesting mix of different corners, but also great visuals.

"Clearly, our results of late have not been satisfactory. Nevertheless, we continue to work hard to improve our performance each and every race weekend.

"Needless to say, the US Grand Prix is one of the most important races of the year for McLaren and we look forward to hosting many of our friends, customers and guests at what I'm sure will be an exciting and fun weekend."

Toughest corner: Turn One. The key to this corner is the 40-metre elevation change on the approach. This incline increases the load on the car by 0.4g, giving the drivers more grip and allowing them to brake very late. More than 85 per cent of the load is then scrubbed off by the apex, making the cars very loose and difficult to control.

Most demanding section: Sector One. As was the case at Suzuka last time out, the opening section of the Circuit of the Americas is fast and furious. Eight of the opening nine corners involve fast changes of direction, with a slowest apex speed of 185km/h (115mph). The drivers compare the challenge to Becketts and Maggotts at Silverstone.

Biggest challenge: Car set-up. COTA has more fast corners than Spa-Francorchamps and more slow corners than the Hungaroring; as a result, car set-up is a delicate balance between slow-speed grip and straight-line speed.

Braking: COTA presents an average challenge for the brakes, similar to the Shanghai International Circuit in China. The drivers apply the brakes at 10 of the 20 corners, with an average deceleration of 3.8g.

Power: The cars use 1.8kg of fuel per lap, with 63 per cent of the time spent on full throttle.

Aero: High downforce. Seven of the 20 corners are taken at speeds of less than 150km/h (93mph), which places an emphasis on slow-speed grip, particularly traction at corner exit. Having DRS zones along the two longest straights help to eliminate the extra drag at high speed.