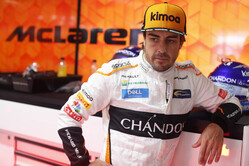 McLaren and Renault were forced to break the official curfew last night following the late arrival of lubricants from BP/Castrol.

While Red Bull wasn't affected as it uses Exxon/Mobil lubricants, the other two Renault-powered teams were hit by a customs backlog resulting from the ongoing storms that have led to Osaka airport being closed on a number of occasions in recent weeks.

As F1's freight organisation chased down the various freight that has been delayed there was concern that without the lubricants neither McLaren or Renault would be able to run in today's sessions.

However, the delivery finally arrived at 04:00 and both teams were given special dispensation to begin work at 06:00, thereby breaking the official curfew which ends at 07:00.

This was the first of the two individual exceptions permitted for the Renault and the second for McLaren, and with teams allowed two exceptions over the course of the season no further action was taken by the stewards.

However, a number of teams are still awaiting freight, and during this morning's session the TV cameras revealed the arrival of two floors for Red Bull.