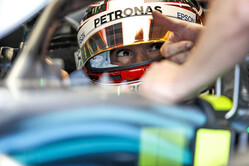 There was overnight rain and though rain stopped a while ago, giving way to a fine drizzle, it remains cool and very cloudy with the threat of further heavy rain over the next two days, while Sunday is expected to be dry.

That said, it will take more than that to dampen the enthusiasm of the thousands of fans here, who clearly up for it and helping to create a unique atmosphere.

There is only one reserve driver on duty, Lando Norris at the wheel of Stoffel Vandoorne's McLaren.

The lights go green an Sainz is first out, followed by Ericsson, Alonso, Sirotkin and Gasly. A mixture of all three compounds, soft, supers and mediums.

With an eye on the sky, there is an understandable desire to get some initial laps in. Indeed, in moments there are 16 drivers on track. Raikkonen, Verstappen and the Mercedes duo the only no shows.

The Sauber pair Ericsson and Leclerc post the first times of the weekend, the Swede posting 35.111 and his teammate 33.484.

Ricciardo posts 30.651, the Australian sending out a trail of sparks as he rounds 130R.

Raikkonen mentions an issue with his gearbox, while Ricciardo reports his car is a bit "understeery".

Hartley's car is fitted with large gate sensor at the rear, Honda (and Toro Rosso) hoping for a strong performance this weekend.

Ricciardo improves to 30.312 as he and the Saubers remain the only drivers to post times.

All four times thus far posted on the softs.

Perez is the first driver to post a time, the Mexican stopping the clock at 32.296. Shortly after, teammate Ocon posts 32.484. Both Panthers on the supersofts.

Twenty minutes in ad the Sauber pair remain on track, both drivers having completed 12 laps.

Raikkonen goes third with a 30.842, the Finn - in a Ferrari featuring a slightly and pointlessly revised livery - on supersofts.

Both Mercedes on track, Bottas on softs and Hamilton on mediums. Vettel also on track on the supers, which is basically the only rubber Ferrari has brought here.

A mistake at the final chicane sees Vettel use the escape road.

Gasly goes 14th and Hartley 15, both are on the softs. The kiwi is unhappy and asks for his engine to be checked as he reports a loss of power.

Another mistake from Vettel, this time at T14.

Half-an-hour into the session and all drivers have posted times, and 17 of them are currently on track.

A moment at the final chicane as Hamilton trips up over a very, very slow Gasly, the Briton taking to the escape road in what could have been a very nasty incident. The stewards are to investigate.

At forty minutes silences falls over the circuit as the extra set of tyres are handed back to Pirelli.

The lull is a lot longer than normal, but after eight minutes, the sound of Alonso's Renault fills the air and the Spaniard heads out. He is followed by Bottas, both are on mediums.

Running wide at Degner 1 after touching the grass Alonso spins through the gravel, somehow keeping it out of the barriers. He is able to continue and subsequently heads back to the pits.

Quickest in the last two sectors, Bottas raises the bar with a 29.137 on the mediums.

As Gasly makes a mistake at T3 and heads off across the grass, Hamilton goes quickest (28.691) on the softs.

Having gone quickest in S1, traffic - including that man Gasly - sees the German abort the lap in the final sector.

Ericsson improves to ninth with a 31.073 on the supers, just behind his Sauber teammate.

As the Bulls switch to supers, Ricciardo goes third (29.373), while Verstappen consolidates fifth with a 29.856.

After a cool down lap, the Finn, despite a mistake in the final chicane, improves by 0.002s.

After brushing the kerbs, Ocon asks for his front wing to be checked.

The Mercedes pair are currently quickest in the speed-trap, Hamilton (194 mph), 6.2 mph (10 km/h) quicker than Ocon who is third quickest. Vettel is fourth, ahead of Perez, Hartley, Sainz, Leclerc, Raikkonen and Verstappen.

The cameras cut to the Red Bull garage where a brand new floor has arrived from Milton Keynes.

Ricciardo is the busiest driver thus far having completed 25 laps, ahead of Verstappen and Ericsson who have completed 23. Vettel has completed the least (14).

As ever, Grosjean is unhappy with his brakes, the Frenchman warning of a "very strange feeling".

After 13 laps on the mediums, Bottas warns that his mediums are sliding a lot in high speed. His teammate is currently on the softs.

Asked how his supers are performing, Ricciardo replies: "Very similar to the softs."