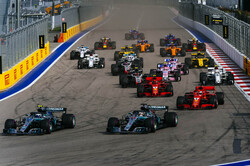 OK, much as we hate these grid penalties, one must admit that they have gone some way to livening up a race that looked likely to be as dull as ditch-water.

The prospect of 'birthday' boy Max Verstappen starting from the back and attempting to carve his way through the field, along with teammate Daniel Ricciardo should be worth the price of admission alone.

Of course, one of the first obstacles they'll encounter will be Fernando Alonso, who is not known as the Samurai for nothing.

Then there are all those drivers who, courtesy of said grid penalties, find themselves at the very front of the grid, almost mixing it with the Ferraris and Mercedes.

As if the prospect of Magnussen, Ocon, Leclerc, Perez and Grosjean fighting for those all-important points wasn't enough, there is the fact that as the race goes on they will face additional opposition in the form of the Bulls.

Clearly lacking speed, Renault opted for the tactical decision not to run in Q2, thereby missing the cut and leaving the drivers free to start on the ultrasofts.

Of course, while we're salivating at the thought of all those various battles, let's not lose sight of the fact that the opening laps at Sochi have been known to produce the odd incident... or two.

Indeed, who will ever forget 2019 returnee Daniil Kvyat hitting Sebastian Vettel in two separate incidents a couple of years back.

Talking of Kvyat, Toro Rosso's Brendon Hartley is one driver who needs a good result today. Asked yesterday what the Kiwi must do to keep his seat, Helmut Marko didn't mess around. "Beat Gasly," the Austrian replied.

While 15 of next year's 20 seats are now 'spoke for', there is still an opportunity for drivers to impress... or not.

Though Esteban Ocon appears set to watch from the sidelines next season, would Racing Point Force India tolerate another Singapore-style showing from Sergio Perez.

There's also the little matter of the Constructors' Championship, with today seeming a good opportunity for Haas to snatch back the initiative from Renault, and Sauber to leapfrog Toro Rosso.

Barring Ferrari having watched The Ten Commandments last night and having found the miracle that will help topple Mercedes, this is the German team's race to lose, and with Bottas and Hamilton looking so strong that seems highly unlikely.

While Vettel's claim that talk of Ferrari having the best car was a lie put about by Mercedes is widely regarded as sour grapes on the part of the German, the fact is that other than a few minor blips the Mercedes has remained the class of the field.

With no serious opposition, both Mercedes and Ferrari qualified on the more durable ultrasoft, while the remainder of the top ten were on hypers.

Worth noting, as one reflects on the previous sessions, this morning Charlie Whiting warned that the stewards will act on those drivers who exceed the track limits.

"If a driver cuts behind the apex of a corner, on the exit of turn 2 for example, but doesn't gain a place or a clear time advantage, no action is likely," he said. "A second occurrence will however result in a report being made to the stewards.

A report will also be made to the stewards immediately if any driver is suspected of deliberately cutting a corner in order to avoid being overtaken, this will be reported as a possible case of leaving the track without a justifiable reason."

So there, you've been warned.

The pitlane opens and one by one the drivers head out. Following a little drizzle earlier, including a shower during the F2 race, it is a little cooler than on previous days, with talk of a further rain shower within the hour.

While the sun is shining, there is a very ominous dark cloud closing in.

Though he is starting from pole, Bottas will have been made fully aware of what is stake in terms of his teammate's title hopes. At the same time however, the Ferraris will be looking for the best possible start, hopefully with Raikkonen riding shotgun for his teammate.

All get away cleanly.

The grid slowly forms... very, very slowly, the noses on both Mercedes pointing towards the middle of the track.

They're away, and Vettel makes a great start, getting right alongside Hamilton as they pursue Bottas. At the back, Verstappen has also made a great start, slicing through the middle of the pack.

Hamilton and Vettel are side-by-side but the Briton has a tow from his teammate and edges ahead of the Ferrari on the run to T2.

In T2 Bottas hold his line, while Vettel is forced wide in order to avoid Hamilton. Throughout the field drivers appear to have a problem understanding track limits.

Lap 2 sees Leclerc and Magnussen side-by-side all around T3, the Sauber driver eventually getting ahead, even though he is on the outside.

Ocon closes in on Magnussen with Perez close behind.

Verstappen makes quick work of both Renaults, and up to 11th, after just 2 laps, he is hunting down tenth-placed Ericsson.

Going around the outside of the Sauber at T3, Verstappen nails Ericsson under braking for T4.

Verstappen makes short work of Grosjean, and sets about closing the 0.7s gap to Perez.

"You're obviously doing a very good job here Max," Verstappen is told, in what must be the understatement of the season.

Hartley pits at the end of lap and switches to softs following a spin, while Gasly appears to have had a clash with Vandoorne.

Sheesh! Verstappen despatches both Panthers and thereby moves up to seventh. Teammate Ricciardo is up to 12th.

Disaster for Toro Rosso, both cars are in the pits and have retired.

Alonso pits at the end of lap 5 and switches to the softs.

Magnussen can do absolutely nothing as Verstappen closes in and quickly passes, the Red Bull leaving the Haas for dead.