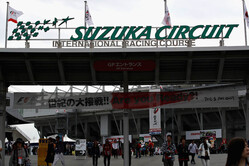 For the Japanese Grand Prix at the epic Suzuka circuit, Pirelli has nominated the medium, soft and supersoft (with this specific combination already selected four times already this season). This is to cope with the notoriously high-energy demands of Suzuka, with long and sweeping corners such as 130R and Spoon. In fact, the cars are almost constantly cornering at Suzuka, with a relentless flow that makes the historic Japanese circuit one of the most-loved on the entire calendar. One year ago, the all-time lap record was broken in qualifying: will the benchmark come down even further this time as has often already been seen this season?

Although the tyre selection is nominally the same as last year, in reality it's a step softer as all the compounds are one step softer compared to their 2017 equivalents.

The rhythm of the circuit, with its famous fast corners, means that Suzuka is all about lateral forces, rather than traction and braking.

The weather is often unpredictable at this time of year, with frequent rain: one of the factors that make track evolution quite hard to forecast.

Wear and degradation is traditionally high: some of the biggest energy loads of the year are put through the tyres.

Teams tend to run high downforce, pushing down on the tyres, in order to maximise grip. This means that the tyres are subjected to multi-directional forces at the same time.

Last year, a one-stopper proved to be the winning strategy (partly influenced by a safety car and virtual safety car: not uncommon in Japan).

Mario Isola: "Suzuka features some of the highest energy loadings of the season and this can lead to greater levels of wear and degradation than we normally see. It's also the only circuit in a figure of eight on the calendar, which means that the tyre wear between the left and the right side is about even. A one-stop strategy triumphed at Suzuka in 2017, but prior to that the trend was mainly towards a two-stopper. It's going to be interesting to see if this year's softer tyres - and even faster cars - produces a different set of tactics. The teams will always look to do a one-stopper if possible, but this of course has to be balanced against how much tyre management is needed to achieve this. Depending also on the time lost for a pit stop, it could be that a two-stopper is quicker."