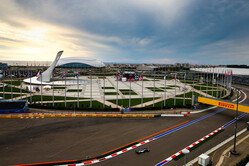 His time was already close to the 2017 pole, but the slippery and dirty surface in Sochi means that big track evolution is a common feature, with drivers often struggling to find optimal grip. This resulted in some cases of surface graining on the hypersoft, which should reduce when more rubber is laid on the track.

The drivers used the opening sessions to find out about all three compounds in Sochi, assessing their speed against likely durability on differing fuel loads. These calculations will form the basis of a race strategy, on a circuit where the generally low energy demands on tyres have to be balanced against the well-known challenge of Turn 3, which can take a lot out of the rubber.

Mario Isola: "With the track always evolving so quickly in Sochi, it's not easy to draw any firm conclusions on a Friday. However, we're seeing that the lap times are getting dramatically faster throughout each session. The compounds also seem to be quite evenly spaced out in terms of performance, which is what we wanted to achieve with the ‘step' between the nominations. It was important for the teams to find out as much about the hypersoft here as they could, to see how it could fit into a race strategy. Balancing the load between the front and rear tyres, given the quite different demands between the first and third sectors of this circuit, is likely to be a key to success in Russia."