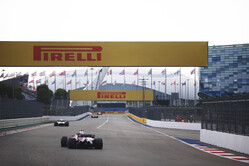 The top four finishers at the Russian Grand Prix used the same ultrasoft-soft strategy, having also occupied the first four places on the grid.

By contrast, Red Bull's Max Verstappen was fifth from the very back of the grid after using an alternative soft-ultrasoft strategy and leading for a large part of the race.

Some graining was seen on the ultrasoft, also due to weather that was a bit cooler than previous days, with some rain falling before the start of the race (which nonetheless remained dry from start to finish).

All three compounds were used, in track temperatures of around 30 degrees centigrade.

Lewis Hamilton won the race using one pit stop, going from ultrasoft to soft on lap 14, as we expected. The top four followed the same strategy, ahead of Max Verstappen and Daniel Ricciardo who started on soft. The highest-classified driver to start the race on hypersoft was Sauber's Charles Leclerc in seventh.

Mario Isola: "There were no real surprises during this race, with the top four drivers carrying out the strategy that we predicted to be theoretically quickest, but we saw a brilliant drive from Max Verstappen and his Red Bull team mate Daniel Ricciardo, who used an alternative strategy to move up into the top six from the back of the grid. Tyre degradation was very low, which allowed for some long stints on the soft. Generally speaking, the tyre performance on these fastest-ever Formula 1 cars was exactly in line with our expectations, with a new race lap record set at the very end by Valtteri Bottas on the soft."