Engine change sees Gasly head to back of Mexico grid 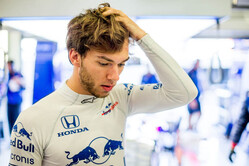 Shortly before today's opening practice session at Mexico City, Honda confirmed that Pierre Gasly would be using a previous-spec power unit, thereby incurring a grid penalty that will see him start a race from the back for the second successive race.

“We have a concern regarding the assembly of the one used in Austin," admitted Honda boss Toyoharu Tanabe. "That power unit has been sent to Sakura for a full inspection and, at the moment, we are not sure if we can use it again this year.

“Therefore, by fitting a new one here, we add one to the pool of available units for the rest of this season," he continued. “The reason for reverting to the earlier pre-Russia spec is that we have a better understanding of this version of the power unit and are more confident in our ability to set it up correctly for the specific conditions here in Mexico City.”

Since introducing the latest-spec unit, Honda has made a number of changes, its task in Mexico not made any easier by the high altitude, which puts extra pressure on the turbo as it seeks to compensate for the thinner air compromising the combustion process.

Gasly completed two laps in FP1 before pitting to have his engine changed to the older-spec unit for FP2 and the remainder of the weekend.

However, while Gasly will hopefully reap the rewards of all this next season when he and Honda move to Red Bull, Hartley is fighting for his future on the F1 grid.