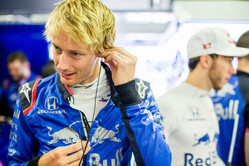 Brendon Hartley: "Really happy with my performance and race today which was rewarded with two points. I was aggressive when I needed to be and did a good job with tyres, the team gave me good info from the pits and the mechanics did a good pit stop - a team effort! From last on the grid to P9 was the max we could do today, and I'm happy with the aggression I showed and how the race went. Even if the points haven't come, I have been very strong in all the last races and am very motivated and optimistic for the rest of the season and beyond."

Pierre Gasly: "It was a long and difficult Sunday. Starting from P19 we knew it would be a difficult race. We took some debris after the chaotic first lap and that damaged the floor a bit, after that I was just trying to do everything I could from inside the car, but there was a massive loss of grip for the rest of the race. We decided for a two stop strategy but there wasn't much we could do today. The pace over one lap in Qualifying was really good so there's positives to take away from the weekend. It's just a shame we couldn't fight properly this time, but I'm really hoping we can carry the pace into Mexico and have a clean Qualifying there to get a good result for the team."

Franz Tost (Team Principal): "Taking into consideration we had to start from the back of the grid, we ended up with a good result by finishing ninth. Brendon had a good race as he saved the tyres and defended his position well against Ericsson. Pierre went straight at Turn 5 on the first lap to prevent a collision with the cars that crashed in front of him, and unfortunately damaged the floor. As a consequence, his car lost downforce and was quite unstable under braking, so he could not be able to catch up to the rest of the field. Nevertheless, he finished the race in P12. With these two points added to our tally, we now head to Mexico for next week's race."

Toyoharu Tanabe (Honda F1 Technical Director): "Another difficult weekend. Our pace was respectable in qualifying, but we were unable to reproduce it in race conditions. Brendon had a good race going from the back row of the grid to eleventh, after which, thanks to the decisions from the Stewards we have scored two points. However, we must keep working to improve our performance."