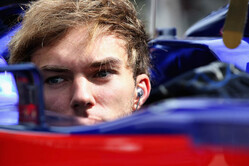 Pierre Gasly: "Q1 was really positive today, I enjoyed that lap and it was good to finish in seventh position. As we will start from the back of the grid, there wasn't much reason to run in Q2, but the new engine specification is a great step and the car feels really good. All weekend I felt very comfortable in the car which behaved well in both the wet and dry conditions. We already know that tomorrow's race won't be easy, we have a lot of cars to overtake and a few good battles in front of us, but if the performance is still there I'll give a big push and I hope we can achieve the best result possible."

Brendon Hartley: "It didn't really matter where we qualified today as we are starting tomorrow's race from the back. After this morning's running, we've set the car up for the race as much as we could and used Q2 as a session for doing practice starts. It will be an uphill race tomorrow, but we definitely have the pace to fight. Hopefully we'll be able to benefit from any opportunity that might come our way, we just have to be ready."

Jody Egginton (Deputy Technical Director): "Today was the first opportunity for dry running and this was especially important for Pierre, given it's the first time he's driving this circuit. Due to the lack of dry running during Friday, it was important to make full use of FP3 in order to gather tyre data and also work through the list of setup items we were unable to cover yesterday. The team worked hard to make up all of this ground, with both drivers completing long runs using two of the compounds and scanning the various control and PU settings. Also, shorter runs provided an opportunity to evaluate some setup items across these two runs, which resulted in useful improvements being made. Because of the PU penalties we've elected to take at this event, the approach to Qualifying was changed on the basis that the grid starting position is predefined, however, we took the opportunity to learn more about the package and conduct three runs with both drivers. Pierre was pretty competitive in Q1 ending the session P7, with a lap time quick enough to suggest Q3 was a possibility at this circuit. Brendon had a slightly more compromised session ending P15, but even with both cars making Q2, we elected not to conduct further timed laps given the decision to fit new PUs here. However, this decision has provided a useful performance benefit here and should continue to do so for the remaining events of the season, so we are happy to take this approach. Looking ahead to the race tomorrow, and considering the performance improvement from the PU, we feel that if the opportunities present themselves we're optimistic we can have a good race and move forward with both cars."

Toyoharu Tanabe (Honda F1 Technical Director): "We had focussed mainly on race set-up during practice, doing more long runs than usual in FP3. Nevertheless, Pierre showed very good pace in Q1 which is encouraging. We will start from the back, but we are still aiming to try as hard as ever in the race, to put on a good show for the enthusiastic American race fans."