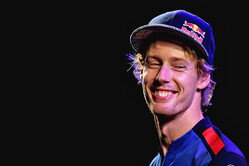 Perched at over 2km above sea level, Mexico City circuit is a unique challenge for cars and drivers. Turbo's are forced to fight in thin air, straining harder than usual to supply vital oxygen to our combustion engine. As the V6's struggle to efficiently burn fuel, MGU-H units are crucial here around a track with one of the longest pit straights on the calendar.

Pierre Gasly: "I finished 13th in last year's Mexican Grand Prix. It is one of the nicest races of the year with a huge crowd of very enthusiastic fans and, thanks to them, the atmosphere is really incredible and special. The fact the race takes place around the time Mexico prepares for its "Day of the Dead" festival also adds a special dimension to the weekend. Last year, I had a difficult time and for various reasons, I pretty much didn't do any running until the race itself - I didn't even take part in qualifying. It's a complicated race from a technical point of view, mainly because of the altitude which affects everything; the engine, braking, reliability and you have much less grip, so it's harder to set the car up. Physically, you are aware that you're taking in less oxygen, so it is a bit tougher than events at sea level. But the track doesn't have too many heavy braking points or high-G corners, so it is not actually that physically demanding."

Brendon Hartley: "Mexico is also a track that I will be revisiting in a Formula 1 car. It's another circuit I really enjoy, having raced there and won in the WEC. It is a very interesting challenge on the engineering front, with the air density being very low, as the city is over two thousand meters above sea level. It means we have a lot less downforce than usual and therefore very high top speeds combined with relatively low grip. The altitude is definitely a factor for the drivers, the team crew and the car. I've spent quite a bit of time at altitude this year, when I went to Colorado for the Leadville 100 MTB race, and I think I will be reasonably well adapted, but you can definitely feel it in the cockpit. Cooling is always a big talking point, so all of these elements combined mean the teams have a lot of factors to get right, and that makes for a very tricky weekend for the car. The final sector in the "stadium" is very interesting from a driving point of view, very tight and with a great atmosphere. The crowd feels very close and everyone in the city seems to get behind the race. I believe we have a good opportunity to do well there, with the various updates we've introduced recently."

Toyoharu Tanabe, Technical Director, Honda F1: "The layout of Hermanos Rodriguez circuit is fairly straightforward. However, for engineers, both on the PU and chassis side, it presents some interesting challenges, mainly linked to altitude. At just over 2,200 meters above sea level, Mexico City is the highest venue on the F1 calendar. On the PU side, the air has less pressure and so the turbine has to work harder than usual. This requires a different set-up on the ICE and means that the MGU-H is under greater strain. In addition, cooling also has to be carefully managed. We replicate these conditions on the dyne, however, there are always adjustments to be made once we start running on track.

"Personally, the last time I raced here was in 1992 with Senna and Berger. I remember the fans were fanatic at that time, and looking forward to see the atmosphere once again. We'll have many colleagues from Honda de Mexico, who here so we hope to show good race in front of them."