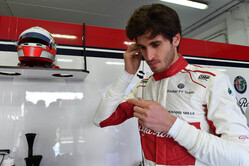 With the season slowly coming to an end, the Alfa Romeo Sauber F1 Team heads to Mexico City, filled with motivation. The team has made remarkable progress over the past few months, and aims to continue to do so in the final three races, with the clear target being to add more points to its tally.

After a mixed race in Austin last weekend, from which Charles Leclerc had to retire after his car was damaged in an incident at the start, while Marcus Ericsson fought his way from the back of the grid to the upper midfield, the team is optimistic of their potential. The demanding Autodromo Hermanos Rodriguez will not only demand from the drivers to handle the physical challenges caused by the high altitude that the track is located at, but will also pose a challenge to the engineering teams to manage the power units’ performance due to the lack of oxygen.

Antonio Giovinazzi will complete FP1 for the Alfa Romeo Sauber F1 Team at Mexico City, taking over the cockpit from Charles Leclerc.

Marcus Ericsson: "The race in Mexico is an exciting one. The fans are amazing and always add to the magical track. The circuit is interesting and the cars feel very low in grip due to the high altitude, which is a unique challenge. It has been a while since I last scored points, so that will be my target and I will work hard to have a strong performance there this weekend."

Charles Leclerc: "The Mexican GP is a very interesting race, as it is different to what we are used to. We are located at quite a high altitude, so it is demanding to drive there – both for the cars as well as physically for us drivers. I look forward to it, and hopefully we can recover from the bad luck we have had in the last two races. We have a few more chances to score points this season and will push to bring home good results."