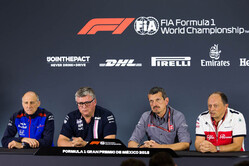 Otmar, first time we've seen you since you announced your deal with Sergio Perez. Why have you chosen to re-sign him and how has he evolved in the year he has been at the team?
Otmar Szafnauer: Well, we chose to re-sign him because he's a fantastic driver. He's great on Sunday, qualifies well, great feedback and he's been with the team for quite some time. I think it's appropriate to discuss all this here at his home race and he's got a big impact on the team and it's good to have continuity as well, from one year to the next. The regulations are changing quite significantly next year and a fellow like Sergio with all of his experience will help us in driving the development forward next year.

Q: Well, how are preparations for next year going and specifically you've now got more financial resource since the takeover. Did that come in time to impact on next year's car?
OS: Yes, it did, just in time for that. It's hard to know how our preparations are going, because this game is relative, and unless you know what the others are finding it's difficult to know where we stand. But we are happy with the progress we are making. We were fortunate enough to run a version of next year's wing in the Hungary test and from that we have learned a lot and it's given us good direction.

Q: Thank you Otmar. Guenther, we'll start by looking back to the race in Austin. Can you clarify what led to Kevin Magnussen exceeding the fuel limit by 170g?
Guenther Steiner: We attacked too much these guys [Force India]. That was the only reason, nothing else. There was no other reason than we tried too hard and until Lewis stopped there was the thought we would get lapped anyway and then we just kept on going and we couldn't make it up in the last laps anymore. It's as simple as this, there is not anything else to it. We just tried too hard to get past Ocon.

Q: On a more positive note, you've recently announced a title sponsorship deal with Rich Energy. Just tell us a little bit more about the deal and how long you have been working on it?
GS: We haven't been working long on it. It came together pretty quick. We look forward to working with them as a partner and to bring new people into Formula 1 is always good, instead of just circulating other people around it, we try to find to new partners, sponsors, for the sport, which is always good. We are working now on the details, because it came together so quick. We have a few things still to sort out but they have gone pretty well and we look forwarding to work with them next year.

Q: No details now?
GS: No, no details yes, exactly Tom, but it will look different. We will change the livery obviously.

Q: Thank you. Franz, coming to you. Let's talk drivers first of all. Brendon had a good race last weekend in Austin, beating Pierre and earning more points in the process. He's under a bit of pressure at the moment, so how impressed by his resilience?
Franz Tost: He showed a good race in Austin, but nevertheless if you look to the results, he has four points, Pierre has 28 points. That means he has to improve his performance if he want to stay in the team.

Q: Let's talk engines then. Pierre's engine from Austin has been sent back to Sakura for checks, leading to more penalties here. Frustrating for him and the team but indicative perhaps of how hard Honda are pushing. Have you seen them increase their efforts this year as the season has gone on?
FT: Well, first of all, the reason for this power unit change is that after the race in Austin they detected on the power unit of Pierre an assembly issue and therefore they didn't want to take any risks and decided to come here to Mexico with another new power unit. We did two laps, decided to change the power unit to the old specification, only because of this very special altitude here and these conditions and therefore Honda thinks they a better knowledge and experience with their older specification to set all the parameters correctly and therefore Pierre will do the race weekend with Spec 2. Regarding the work of Honda during the year, they have so far done a fantastic job because they have improved the performance a lot, and also the reliability, and I am really looking forward to the last tow races, in Sao Paulo and Abu Dhabi, because there hopefully we won't have any penalties, and for next year, because they are in the right way and they will improve during the winter months and I'm looking forward to seeing Red Bull Racing and Toro Rosso next year with Honda.

Q: Have they exceeded your expectations?
FT: They have exceeded expectations with regards to reliability, because we thought we would have much more problems but to be honest we haven't had any major issues, and also regarding the performance, because with the new specification we are not far away from the top teams.

Q: Thank you, Franz. Fred, coming to you, thank you for waiting. We had Kimi in here yesterday, answering a lot of questions about his victory last time out. A lot of people wanting to know when we are going to see him drive a Sauber for the first time. Can you shed any light on that? Will he be driving at the Abu Dhabi test for example?
Frederic Vasseur: We are still discussing, but I hope that we are able to take a decision during the weekend regarding Abu Dhabi.

Q: During this weekend?
FV: Yeah.

Q: That victory last weekend, how important is it for you to have a 2018 race winner driving for you next year?
FV: At least it will be a reference, that you are sure that you have someone in the car who is able to make it. It's important for the engineer just to be focused on the car. He's doing it, he did a pole position in Monza, he won last weekend in Austin and for sure it will be a good reference. I think we are still a young team, because we are also turning the company a lot, and to have this kind of leader it will be very helpful.

Q: You're a young team, but you have made big strides this year. How has the progress you've made changed your ambitions going forward and what changes are you making at Hinwil to meet those ambitions?
FV: I think it's a long process, step-by-step. We signed a good deal with Ferrari on the supply of engines and then Alfa Romeo joined the company and even if it's not helpful on track, at least an iconic brand joining the team [means] that we are much more attractive for other sponsors, for recruitment also and step-by-step Simone joined the team and Jan Monchaux joined the team and I think you can't say that it's one thing that will completely change the situation but step-by-step we are coming back. We started from Melbourne where we were completely at the back and now we are midfield. It's always, every single weekend very tight between P8 and P14 but we are in the middle of the range and it's a huge motivation also for the whole company, because we know perfectly that each time we are bringing something it will pay off on track and it was not the case last year because we were too far away from the last one. But step-by-step we are coming back.

Q: Do you feel you have got some momentum now?
FV: Yeah, yeah, we've showed over the last races that the pace is there for quali, that we are always fighting for Q3. The last races were a bit more difficult, we are too close to the drivers from Haas, and even at the press conference that we are side by side. I will stay away this weekend.

Q: (Luke Smith - Crash.net) Franz, you said that Brendon needs to improve his performances if he wants to remain with the team. How long does he have left to convince you about a seat for 2019 and do you have a deadline on when you want to make a decision for next year?
FT: Of course. First of all, we have to finish the season to get a clear picture and then I assume in December Red Bull will decide the driver line-up of Toro Rosso.

Q: (Frederic Ferret - L'Equipe) A question for all. With the change of regulation I assume you may have already number on next year's car. how big is the gap with this year's car?
FV: It's difficult to have a clear picture today but for sure I think we will improve on the engine. We have still some doubt about the tyres and on the aero package. If you are speaking about the aero regulations, it's a huge step back. I think everyone is focused to recover. I don't know when we will recover and if we will be able to overshoot but it looks tricky.

Q: Guenther, your thoughts?
GS: Mainly on the aero I guess your question is, with the new regulations. Now the work is going on and to commit now to a number or to a comparison to this year is difficult because there is still a lot of work going on until the launch car is produced but I think it will be close to the launch car from last year when we get there to Melbourne.

Q: Otmar, you said earlier that you ran the new wing at the Hungary test?
OS: We did and it was a significant step backwards. We've got aggressive targets, I don't know if we will be able to hit them. We're trying to predict the future as to what we can find, but yeah, it was a massive step back for us.

Q: And Franz?
FT: The same for us. But I discussed it with the people in the wind tunnel and as it looks currently they do not believe that overtaking will become much easier, which means there is less dirty air behind the car. Therefore I'm not sure that this regulation change will end up where we expect - that overtaking will become much easier. I think that at the beginning of next season the teams will have reached a similar level on downforce as nowadays.