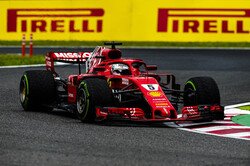 While today's Q3 strategic error has no doubt gone some way towards finally killing off Sebastian Vettel's title hopes, surely there could have been a kinder way to put the Prancing Horse out of its misery.

The Italian team, whose hopes have fallen apart since the end of the summer break, much as they did in 2017, already reeling as a result of the recent unexplained loss of pace, was left almost a laughing stock by the strategic error which saw both drivers sent out on Intermediates at a time everyone else was on supersofts.

Like most gambles, if it had paid off, if the rain had arrived sixty seconds earlier and the Mercedes pair found themselves slithering around Suzuka, Ferrari would have been heroes. But it didn't and instead, and not for the first time, the Italian team got it totally wrong.

"From the way things were done, I do not think that pole position was within our reach, but what happened today is unacceptable," said Arrivabene, according to Motorsport.com

"I am very angry," he admitted. "It is not the first time that these mistakes have occurred. I do not feel like pointing my fingers at someone in particular, but I'm very disappointed.

"Unlike on other occasions, it was easy to understand what was happening on the track, as all our opponents left the pits with slicks," he said, making clear that he saw it as a very basic error. "Sometimes it is more useful to take your eyes off computers and watch the track, using common sense.

"It is true that we are a young team, and we are probably missing an 'old hand'," he admitted, "an experienced person capable of reading situations correctly and quickly."

Only last week, referring to the glory days when the team was run by a Frenchman, a Briton, a South African and with a German driver, Bernie Ecclestone claimed Ferrari is "too Italian" to win the title.