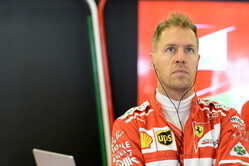 Kimi Raikkonen: "It was a tricky qualifying with mixed conditions. In Q3 we thought that the rain would come earlier, so we decided to go out on Intermediate tires. Unfortunately it did not happen and then we were a bit off with the timing. We came in to fit the Supersoft , but in turn 14 I touched a wet kerb, ran a bit wide and lost some time. Obviously fourth place is not ideal, but at least we were able to put a lap together despite the mistake. Third position could have been easily possible. It's a pity we did not get it today; the feeling with the car was getting better and better in qualifying. For sure tomorrow is going to be tricky, but we will do our best."

Sebastian Vettel: "At the beginning of Q3, I was asked if it was ok for me to go out on Inters and I said yes. Obviously, it was the wrong decision and now it's easy to say, but it could have been the other way around. We thought there could have been more rain, but in the end it didn't come. If it had rained five minutes before, it would have been a different story. However, it wasn't our session in terms of timing and we've been through similar situations a couple of time so far. We are a team, so now we accept together the consequences. Tomorrow is another day, it won't be easy as we start from the back, but it's not impossible."