Questions over Ferrari's loss of power 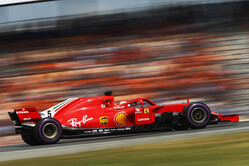 For some time now, rival teams have openly questioned the massive step forward Ferrari has taken this year in terms of its engine power, Lewis Hamilton famously referring to it as a "trick".

Though there have been no official protests, Mercedes and Renault have openly questioned the obvious power gain that has not only moved the Ferrari works team forward but its customer teams, Sauber and Haas.

Auto Motor und Sport reports that GPS data in Singapore and Sochi shows that Ferrari has lost its power advantage, a claim that makes sense when one considers Sebastian Vettel's inability to out-gun Lewis Hamilton at the start of Sunday's race.

All manner of theories as to how Ferrari has gained its power have been put forward, and throughout the FIA has insisted that everything is legal and above board.

However, one crucial difference between the Ferrari power unit and that of its rivals is that it features two batteries for its energy storage system, and according to Auto Motor und Sport, since the FIA called on the Italian manufacturer to fit a second sensor the power advantage has 'disappeared'.

On the straights at the Red Bull Ring, Silverstone, Hockenheim, Spa and Monza, the Ferrari was thought to have up to a 0.5s advantage over the Mercedes - "we clearly see that in our GPS measurements," said Renault Cyril Abiteboul - but in Singapore and Sochi the Ferrari was clearly no match for the Silver Arrows.

It is unclear when the second sensor was fitted, but though rival manufacturers have accepted the FIA's assurances that all was legal, behind the scenes there has been fierce questioning of the governing body as to where Ferrari suddenly found its power.

Though Mercedes insists Ferrari still has plenty of power, it is the sudden loss of apparent grunt under acceleration that is now puzzling rivals.

While some will say that Ferrari has not only lost out in recent races on outright power, Cyril Abiteboul admits that the lack of overall speed could well be down to the recent reduction of engine power. "If they have less power, they may not be able to drive the wing adjustment from before and have to return with the downforce," he said.

Whatever the truth of the matter, anyone can see that - mistakes aside - the Ferrari we have witnessed in the last couple of races is not what we saw at Silverstone and Spa.