Arrivabene hits out at leaks 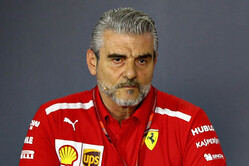 Earlier this week, Auto Motor und Sport suggested that Ferrari's loss of pace in the last couple of races was due to the fact that the FIA had fitted a second battery sensor in view of the fact that the Maranello outfit uniquely features two batteries in its energy store.

Since arriving in Japan both Ferrari and the FIA have said, little, while others have rubbished the suggestion.

However, in the wake of another comparatively dismal showing in today's practice sessions, which once again saw Ferrari well off Mercedes pace, Arrivabene admitted that the FIA has fitted a second sensor.

However, the Italian appeared more concerned at how the story of the extra sensor got out there, and, mindful of the Spygate saga which saw McLaren fined $100m and excluded from the championship after it was discovered that the Woking outfit was passed Ferrari's confidential technical information, sent out a clear warning.

"Our battery layout is quite complex," he told Sky Italia, "so we agreed with a request from the FIA to work together with them.

"We had the second sensor," he added, "but it does not change in any case the performance of our car.

The Italian also took the opportunity to state that the recent drop in overall pace is about slow-speed corner performance as opposed to sheer straight-line grunt.

"We are suffering in high and medium downforce tracks," he added. "Especially on slower corners we are in trouble. We miss load, and this problem leads us to have difficulties in the management of the tyres, because we cannot always put the tyres into the right operating window."