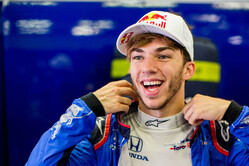 Pierre Gasly has been reprimanded following an incident in this morning's opening practice session.

On the approach to the final chicane, the Toro Rosso driver slowed almost to a halt on the racing line, leading to a heart-stopping moment when Lewis Hamilton, exiting 130R, had to take evasive action, swerving to avoid the Frenchman and heading down the escape road.

Called before the stewards, Gasly "admitted that he impeded Hamilton and acknowledged that he ought to have stayed on the right hand side of the track and had left it too late to move off the racing line".

Noting that Hamilton "had to take evasive action" to avoid the Toro Rosso, but that it was FP1, the stewards opted to hand Gasly a reprimand, his second of the season.

His first reprimand of the season came at his home race at Paul Ricard when he was involved in a first lap clash with countryman Esteban Ocon that saw both drivers eliminated on the spot.