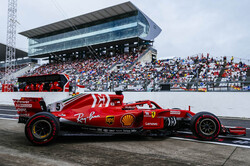 In truth, the titles were already lost, but today's strategic mistake in the final phase of qualifying appears to have killed off any remaining hope.

While, despite the threat of rain, Mercedes sent out its drivers on supersofts, Ferrari drivers Sebastian Vettel and Kimi Raikkonen headed out on the green-banded Intermediates.

While ideal when the track is damp or not too wet, they are as good as useless in the dry, as both Maranello drivers were soon to discover.

The Mercedes pair, and the other six drivers continued on their way, posting their times on the supersofts, while the Ferrari duo pitted at the end of their first lap to change to the slicks.

However, by now the rain was arriving, and the Ferrari pair had missed out on the optimum conditions, Raikkonen lost time running wide at Spoon, while teammate Vettel had offs at both Degner and Spoon. As a result, the Finn will start tomorrow's race from fourth and the German ninth, though in the wake of Esteban Ocon's grid penalty he is promoted to eighth.

"I think, why we took the decisions, five or six minutes later it started to rain quite heavy so there was something in the air," said Vettel. "I think we expected there was more rain coming and obviously it didn't come, so then it was the wrong decision. When the conditions are like this either you get it right or you get it wrong. So I'm not blaming anybody."

Asked who was responsible for the call, he replied: "Why does it matter? Our call.

"It was OK," he continued. "I lost it into Turn 14 so that was obviously the only lap that I had, which didn't help.

"We obviously lost a bit of timing due to that in the beginning but as I said, if it starts to rain five... six... seven minutes earlier, then we did a miracle because we're the only clever ones. And if it's like that, we're the only ones looking stupid.

"As I, therefore I defend the decision, it's our decision as a team. Obviously it wasn't wet enough to start with and the rain didn't come, it came later."