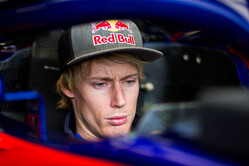 Already destined to start the British Grand Prix from the pitlane after the FP3 crash that left him unable to participate in qualifying, Honda has opted to replace a number of components on Brendon Hartley's car.

"Considering Brendon's crash yesterday and starting position today, we've chosen to introduce some new components to his power unit before the race," confirmed the Japanese manufacturer.

"We didn't find any considerable damage trackside yesterday, however we'll check further details back in Sakur."

The kiwi will receive a new ICE and MGU-K, bringing his tally for the season so far up to 6 (ICE) and 5.

The New Zealander suffered a horrific crash in the morning session yesterday when his left-front suspension failed.

While his team investigated the cause of the failure, the FIA ordered it to completely change the front suspension on his teammate's car.

Not only did this cost Pierre Gasly track-time in FP3 it left him struggling to find a good set-up, which in turn hampered his qualifying efforts.

"I'm not really a believer in luck or superstition," said Hartley following the crash. "This was obviously completely out of my control.

"It was instantaneous," he continued, "there was no warning. I didn't hit any kerbs, there were no vibrations beforehand. So, the moment I hit the brake pedal, some of the highest forces the suspension sees something at that very moment broke.

"Obviously I tried to fight the car, slow it down as much as I could but I still hit the wall pretty hard. I remain optimistic for the race," he added, "but there's no denying that it was disappointing and I would've much preferred to be out there in qualifying than watching on TV."