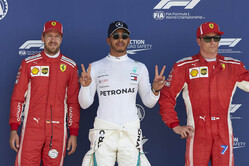 Q: Lewis, congratulations, fantastic. Your fourth consecutive pole position here, a record sixth pole position at the British Grand Prix, your adoring fans looking on. That was a very special lap you had to find there?
Lewis Hamilton: These guys are the best.

Q: You're shaking with emotion, literally!
LH: Oh man, I needed... I gave it everything I could. It was so close between these Ferraris. The Ferraris pulled something out when we got to Q3. I was just praying I could do it for you guys, and I'm so grateful for the support, because without you guys I wouldn't have been able to do it.

Q: Where do you think you made the difference on that last lap?
LH: I don't even remember it! I honestly don't remember it, man. Maybe Turn 13... love you too guys!

Q: Congratulations again. Let's have a quick chat with Sebastian Vettel. Second place, Sebastian, you look like you're walking wounded here, on your neck.
Sebastian Vettel: Yeah, I had a bit of an issue in practice, but it was fine in Quali.

Q: Did you think you could take that pole position?
SV: To be honest, this morning, no. I wasn't sure if I could do Quali. It was very close. I don't know, the last lap I was very happy with it, but I seem to lose a lot of time in the straights, so I think I'm missing some... missing a bit of tow, but I think it was very close, so I'm happy with second and it gives us a good chance for tomorrow.

Q: Well done. Kimi Räikkönen, it's the seventh day of the seventh month and you put car number seven in third place. Are you satisfied with that?
Kimi Raikkonen: Not really. I think I had all the tools today to be faster but I locked the front wheel into 16 a bit on the last lap and for sure gave away enough time to be in front but that's how it goes.

You told me two days ago that you're driving as well as ever, do you still think you have a chance of victory tomorrow?
KR: Yeah, I think I've got a good car and my car should be good tomorrow. Obviously it's hot and it will not be an easy race with the tyres, so I think we might see a few different things happening there, but we're aiming for the top for sure.

Q: Lewis, it was an incredibly tight qualifying session and ended up with your fourth consecutive pole position here at Silverstone. How does it compare to the ones that came before?
LH: It feels night and day different. These guys really pulled something special into Q3. I don't know what they did yesterday, but they've come so strong today. I knew we were up against it but to really put together the laps was the hardest I can remember it being. It's such a technical circuit and such a tricky circuit and to really position the car in the right place and get the maximum from the tyres it took everything from me to get it. But the fans were there and I could see them. And I knew they were here so I really, really wanted to do it, and if anything, with the pole, give a boost to England maybe. They won't be watching obviously, because they'll be playing, but you know what I mean - maybe start the wave and let them continue it. Huge amount of pressure on today, but so grateful for my team working so hard. Ferrari obviously have picked up a lot of pace this weekend, but we're in the best position we can be and our long run pace was good yesterday, so I'm excited for a close race tomorrow.

Q: Thank you, Lewis, well done. Sebastian, simply, what was the difference between you and Lewis today?
SV: Half a tenth.

Q: Four hundredths.
SV: Less than half a tenth!

Q: Can you just elaborate a bit more? How did that gap manifest itself on the racetrack today?
SV: I don't know. It's so little time, it's practically the same lap. I was pretty happy with the first run in Q3 and I knew had a little bit more in Sector 3, and bits around the track, which I think I got right on the second attempt, but I seemed to lose a little bit down the straights, I'm not sure why. But more or less I had two laps that were identical. Half a tenth you can always argue you find somewhere. I think he was just a little bit better in the final run, but for tomorrow I think we should be fine.

Q: Kimi, you set the fastest first sector there in Q3. Can you just talk us through the rest of your lap, because you were less than one tenth of a second behind Lewis as well?
KR: Yeah, I think we had first and last sector but in the middle obviously I think I had a small moment on the first try, the first set, into Turn 7, so I took it a bit easier. I was still gaining but I'm sure there were places to gain a tenth easily but obviously it didn't happen today, so this is what we got. It was close but third is not too bad.

Q: (Scott Mitchell - Autosport) Sebastian, could you just explain the problem you had with your neck after FP3 and the problem it gave you going into qualifying.
SV: It wasn't the most enjoyable session but it's not... nothing. I did the session, so I was fine. We had to call it a bit earlier this morning that I wanted but yeah, it was fine in quali.

Q: (Christian Menath - Motorsport-magazin.com) Another question for Seb on the neck. How confident are you that tomorrow it's going to be OK - and can you describe how it all started? Was it a bump the circuit or lateral forces? What was it?
SV: No, I don't know what happened but it went a little bit stiff. We loosened it up and for tomorrow I think the night will help. I'm not worried. Also, the speed tomorrow is less than in quali, because you have more fuel and you'll be a bit slower so it's going to be OK.

Q: (Keith Collantine - Racefans.net) A question for Lewis. Lewis, can you tell us a little about your poll position lap please? Where are you flat out around this superfast Silverstone circuit now? What does it feel like? And also, the gap to your team-mate Valtteri is quite big today, and a very small gap to the two gentlemen either side of you. How much of this is down to the car and how much is down to the driver?
LH: This is, as I was saying before, it's such a technical circuit and it's about car placement and you've got to have, obviously, the package. Our downforce level, I think, has been good but, I mean, you see how close it is between us. This has been a strong circuit for me for years, as you can see and my job is try to make... it is to make the difference. So, I think there was... I didn't leave anything on the table today. The lap was... I mean it was just intense. I left the pit lane, I think the first lap was OK, it was pretty good, and then I saw that I'd dropped to second. Obviously, that naturally just adds a little bit more pressure. Because you know that he's going to improve again, so I've got to improve the same and a bit more. So, to push over the limit just a little bit more, without losing it is one of the toughest positions to put the car. And this is the fastest track in the world, this is. We're flat-out through Turn One, we're flat-out through Copse, it's insane, to turn in there at 300-and-whatever-it-is-kilometres we're doing. It's flat-out into Maggotts and Becketts, all the way to 11, 12...

LH: I don't know all the names but you're flat-out all the way into it. You have a small lift, then you have a full lift, then you're back on the gas again. Also, Stowe is just... with the headwind that we have there, it's incredible how fast it is. I think on the TV it doesn't look like we're lifting - but we are. I got to the end of the lap, I think I was up 0.17s, and I came around that last corner and it started to diminish a little bit. I think I came across the line 0.90 better than my previous lap, and you're just praying that's enough - that little bit... because you're gaining and losing throughout the lap. So, yeah, I can't tell you how happy I am, happy for the fans, and I hope that I can deliver for them tomorrow.

Q: Phil Duncan (Press Association) Congratulations Lewis on your lap. You looked like you were on the ragged edge throughout the lap, and obviously when you got out of the car, you were pretty pumped. Where does it rank in terms for you, that pole lap?
LH: I think it's, for me, with the whole build up, with the whole intensity, with the whole spur-of-the-moment thing, knowing how close we were, for me it feels like one of the best laps that I've been able to produce. I would say it felt like the most pressurised lap that I've ever had. And then afterwards I was just... I can't tell you how... I was shaking through the emotion, through the adrenaline rush was way above the limit that I had experienced before, which is kind of crazy for my 76th. But the 76th is so special. I'm so, so happy, and, as I said, the team have just been doing a great job and I'm really happy I have been able to deliver for them as well.