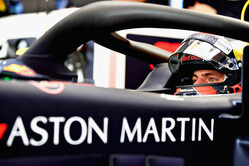 While expecting little in Austria but ending up with a surprise victory, Red Bull is expecting very little from tomorrow.

As feared, today's qualifying clearly demonstrated that despite the upgrade and its own party mode the Renault power unit is no match for the Ferrari or Mercedes.

"If you miss 80bhp you know you're going to struggle," Max Verstappen told reporters. "Also now with the cars we have, a few more corners became flat out so it just gets more and more difficult.

"If you lose more than a second on the straight then you know it's going to be a difficult weekend," he continued, "but actually I was quite happy with how the car was performing in qualifying so actually I don't have anything to complain about."

Asked where he felt he was missing out, the Dutchman replied: "Turn 1, for example, and Copse. The big problem as well is when you go through a corner which is almost flat, then when you accelerate out of the corner our engine is just not pulling, and their engine then recovers.

"Then you know you don't have the horsepower, especially the corners which are flat, you start scrubbing speed with the steering, and you lose even more because after the corner it's getting even bigger.

"When you go through Maggotts and Becketts in that area, the problem is that you brake a little bit and you go back to flat-out in Stowe, out of that corner, because you go really early on the throttle, you have a bit of a steering lock and you just lose a lot."