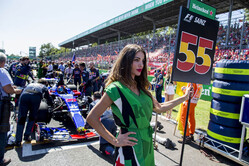 Amidst the continuing row over Formula One's decision to do away with grid girls and replace them with grid kids, perhaps our old friend, former McLaren communications boss, Matt Bishop, sums it up best.

"Here's a tip from an experienced #F1 PR man (moi)," he tweeted earlier this week following F1's announcement that it was to adopt the practice of using grid kids. "If you'd announced this BEFORE letting it be known that #gridgirls had been axed, you'd have copped a lot less grief than you did. #JustSayin."

And as former grid girls dismiss claims that they were used and objectified, not to mention being put out of work at the behest of others, mostly women, the sport does appear to have got itself into a fine old pickle.

Speaking to newspaper reporters, F1 boss Chase Carey admits that while he personally saw nothing wrong with grid girls, many felt it was time to move on.

"I think the reaction has been what we expected," admitted the American. "Unsurprisingly, many long-term fans view it as part of the sport they grew up with and I respect that.

"We're going to maintain glamour," he insisted. "We're going to continue to have pretty girls at races. I think it's part of life, and it's a part of what makes our sport special. It is a sport of glamour and of mystique. But I think you have to continue to evolve. In today's world there are obviously different sensitivities to ten or twelve years ago. I don't think you can just be stubborn."

While accepting the decision and going along with Carey's claim that the move was primarily "a decision for fans", over the years we at Pitpass cannot recall a single email from a fan, or witnessed a post on other sites or social media, complaining that their waning interest in the sport was down to the objectification and exploitation of grid girls, rather the failure to get to grips with the real business of the day, the racing.

Indeed, putting aside what some might see as a sexist reference to "pretty girls", many fans would like to see some pretty cars, cars with individuality and designer flair, as opposed to the lookalikes the sport is restricted to these days.