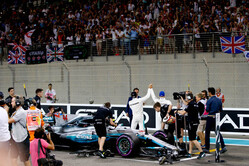 Valtteri claimed his fourth career pole position - his first at the Yas Marina Circuit and fourth of the 2017 season. Lewis will start tomorrow's Abu Dhabi Grand Prix from P2 on the grid. Today's result marks the 50th front row lockout for the Mercedes-Benz Silver Arrows in Formula One. Both drivers completed one run on the UltraSoft compound tyres in Q1 and two runs in both Q2 and Q3.

Valtteri Bottas: It's only the fourth pole of my whole career and I had to beat some pretty good qualifiers, so it's a great feeling to start from P1 tomorrow. It was a really good qualifying, clean and smooth. With the changes we made, the car was behaving much better in qualifying than it did in free practice. Run after run, I could always find some time here and there, I really worked on the details. But the weekend is not over yet; we want to finish strong tomorrow as well. We were nearly there in Sao Paulo and now I get a second opportunity. It would mean a lot to end the season on a high. However, no matter how tomorrow goes, it will be nice to head into the winter break knowing that I had the speed to be on pole two races in a row. That's a good feeling and a good basis to start working for 2018.

Lewis Hamilton: Congratulations to Valtteri, he did a fantastic job in qualifying. It's good to see him performing at this level, particularly at the end of the season which puts him into a great position for next year. For me, practice was great. Then I made some changes in anticipation of the track cooling which I think were not the right ones in hindsight. But it was good to experiment a little which I hadn't really done all year long. However, that's why I struggled a little bit with the balance in qualifying. I think in the end I was up about a tenth and a half out of Turn 1, but then I lost it somewhere else through the rest of the lap. Nonetheless, it was fun to be out there, challenging in the last qualifying of the year. Now we can get on with the race tomorrow. It's a very hard track to overtake, but I will give it everything for sure.

Toto Wolff: That was a great lap from Valtteri and I'm really pleased to see him claim pole position - it shows he has really bounced back after some tough races after the summer break. Lewis scored a very strong second place, too, and it's great to see our boys lock out the front row at the final race of the season. Our car was the fastest in every sector today and that is a first sign of how we have kept the level high since winning the championships. Looking ahead to tomorrow, we cannot underestimate the importance of the race. The final race gives an important momentum into the winter and we will be going all out for the win. The long runs yesterday looked very similar between ourselves, Ferrari and Red Bull so we are in for a close fight!

Andrew Shovlin: Firstly very well done to Valtteri on a well-deserved pole position and his second in a row! He'd had a few issues over the sessions getting the tyres to come in for a single lap but he seemed to judge it perfectly when it mattered. Overall, the day has gone rather well and both cars had a busy but productive session this morning. One of the challenges of this track is following the evolution of the circuit and adapting from the hot conditions in the earlier sessions to the cooler conditions you face in qualifying and the race. Both drivers felt that the overnight changes had moved the car in the right direction giving a more consistent balance compared to yesterday although the windy conditions were never going to make it an easy car to drive. We were also perhaps finding it a little easier than others to get the first lap out of the tyres. The traffic during the session was quite tricky, clearly a lot of teams were trying different approaches to the outlap and it made it hard to find a bit of track that would allow you to prepare the tyres how you wanted. More of less from the word go it was clear that both Valtteri and Lewis were going to be contenders for pole, we had a very close eye on Ferrari although as the sessions went on our drivers seemed to be able to keep finding a little more each run and we had an entertaining shoot-out for pole between the two of them. Having both cars on the front row for the race tomorrow puts us in the best possible position as a team although we're not expecting the race to be easy. The Ferrari and Red Bulls both showed very strong pace on Friday and no one has much to lose at this stage of the season so we're ready for a good fight.