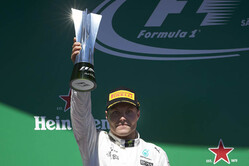 Valtteri took second place today - his 12th podium with the Silver Arrows and best ever result at the Autódromo Jose Carlos Pace. After starting from the pit lane, Lewis finished today's Brazilian Grand Prix in P4. Today's result marks the 25th podium for Mercedes-Benz Power in the 2017 season.

Valtteri Bottas: I think we lost the race in the first corner. When I dropped the clutch at the start initially, there was less grip than I expected, so I broke the traction and got some wheel spin. Seb got a better getaway and managed to get on the inside. That is unfortunate because the race pace between us and Ferrari was very close today and we had a similar strategy. When we went for the Softs, we tried the undercut and tried to attack with the new tyres, but there was no way to get past. We wanted to attack in the very end again but, when I was trying to pick up the pace again, there was nothing left in the tyres. After the good result yesterday, I had very high hopes for today. But if you look at the positives, it has been a much better weekend for me personally than I had for a while. And it was not a bad result for us as a team looking at the position where Lewis started today, so that's good.

Lewis Hamilton: I had a great time, I enjoyed the race very much. I had so much pace today, it would have been an easy win this weekend. So on the one side I am disappointed that I put myself in the worst position for today. But yesterday is behind me, today has been very positive, I had fun coming through - it felt like the go-karting days where I would always start in the back in my first year or two. My goal today was really to just try and redeem yesterday's mistake, to make the team proud and get some points back. I was trying to get back to third, I just ran out of tyres in the end. But I enjoyed the battle today and hopefully that continues to show to everyone that I still have a lot of fire in my heart and many, many more races to go.

Toto Wolff: My first words today must go to our team members. This has been a weekend of extreme and contrasting emotions for us, and then this morning the guys came in again and rebuilt Lewis' car from the ground up. It has been humbling to see their spirit, resilience and dedication this weekend. And it was matched by our two drivers: Valtteri pushed every lap of the race, hanging on to Sebastian but unable to close in quite enough to claim the lead, at a circuit where overtaking is difficult between cars of similar performance; while Lewis delivered the best fourth-place finish I have ever seen. For Valtteri, the race was decided from the start: he got wheel spin on the start which opened the door to Sebastian at Turn 1. For Lewis, he transformed a pit-lane start into a finish just five seconds off the front; it was one of his best performances of the year and showed that we had the quickest car here by a good margin. He threw everything at it today and it was a champion's drive. Now we move on to Abu Dhabi and will be aiming to finish our season on a high.

Andrew Shovlin: It was a frustrating result for both of our drivers and for the team, although it's also a day that is easy to take positives from. With Valtteri the race win was decided by the smallest of margins, a little too much wheel spin off the line gave up the lead, an undercut that almost worked but in the end we were just a couple of tenths from making it happen. After a great lap to secure pole, it's always going to be disappointing to come away with anything less than a win but he has had a very solid weekend and did a good job managing the tyres on a track that was up at 60°C and showed pace in the race that looked every bit as fast as Vettel. For Lewis, to start from the back and finish just five seconds off the leader is a great achievement but also frustrating that we didn't quite make it to the podium. He drove an attacking race but to do so was pushing the tyres to the limits on both sets. We stayed out on the soft as long as we could but once we started to lose the rears, we had to come in for the super-soft and we couldn't afford to manage those, so he was pushing hard from the word go, trying to reel in the leaders. We've come into these final races with an eye on using Fridays running for 2018 development but our desire to win races hasn't diminished and it's a shame to leave here without the win. However, we can take some comfort in the fact that our car was the fastest today on what was the hottest track of the year, which shows the progress we have made with the W08. It's been a tough weekend for the team but we are good at learning from tough weekends. We are looking forward to Abu Dhabi, it's a great track that should suit our car and we'll go there looking to finish what has been a long but amazing season on a high.