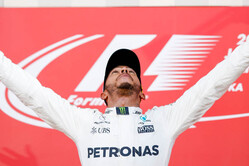 Not that long ago, Juan-Manuel Fangio's record of 5 titles seemed the impossible dream. But then, having won his first two titles with Benetton, Michael Schumacher moved to Ferrari as part of a dream team that included Jean Todt, Ross Brawn and Rory Byrne.

Over the course of 11 seasons, the dream team added five more titles to the German's tally, creating a benchmark that would seemingly never be equalled.

Now, with Lewis Hamilton having secured his fourth title, an achievement that puts him just one behind Fangio and three behind Schumacher, Brawn believes the Briton can surpass the German and set new records.

Asked if the German's records are in sight for Hamilton, Brawn told Sky Sports News: "I think they are.

"When that happened I couldn't imagine it being beaten," said the Briton who worked with Schumacher at Benetton and Ferrari as the German made history, "but looking at the way that Lewis is performing they could be.

"He's one of the greats," said Brawn who was instrumental in bringing Hamilton to Mercedes. "You've got to say he's one of the greats comparable with any of the iconic characters in Formula 1. He made hard work of it in Mexico, but apart from that he's been exemplary all year."

Of course, Hamilton's cause has been helped by the fact that from the outset, Mercedes was on top of the new engine formula introduced in 2014, the Briton's second season with the German outfit. In his first season with Mercedes Hamilton won just one race.

At Ferrari, Schumacher joined in 1996 and went through four agonising seasons before it finally came good. Over the course of those four seasons, as Ferrari did what it always does, take careful aim and seemingly deliberately shoot at its foot - ask Alonso, ask Vettel - Schumacher finished runner-up twice, third once and fifth before the Maranello outfit finally got its act together. After that, the rest, as they say, is history.

Without in any way doubting Hamilton's talent, one has to ask how the Briton would have reacted to those four seasons when his team appeared intent on ruining its own chances.

Fact is, with Mercedes unlikely to lose its supremacy under the current engine regulations, Hamilton has three more seasons in which to claim those three titles and 29 race wins. Naturally, there will be wins for Ferrari and Red Bull over those three years, but for the most part Mercedes will remain the benchmark.