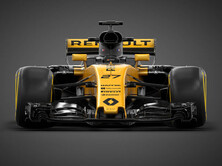 Despite few rule changes, Renault is producing an all-new car for 2018 it has been revealed.

Asked how the Enstone outfit is progressing with its 2018 car, the R.S.18, Technical Director, Nick Chester, said: "We're making strong progress, it's where our focus lies.

"It's a completely new car despite a relatively low number of regulation changes," he continued. "We've learnt a lot on the aerodynamic package and the balance of a car built to 2017 regulations, so the car should represent a strong step forward.

"We'll be doing some aero runs in practice in Brazil with a variety of aero instrumentation to help prepare the 2018 package," he confirmed.

It's fair to say that the French outfit has had a hit and miss season. Accepting that the strength and reliability of Mercedes, Ferrari, Red Bull and Force India means the top eight places are often spoken for, the Enstone outfit has managed to pull together a few good results.

However, poor reliability, initially for Jolyon Palmer but in recent races for Nico Hulkenberg has left the team seventh in the standings, just one point ahead of Haas.

Ahead of its second season back in the sport, Cyril Abiteboul had targeted fifth.

"Whilst achieving this is still mathematically possible, it is now a tall order after a race where we didn't score points," admitted the Frenchman. "Mexico highlighted our performance potential. Both cars sadly retired, however the two cars reached Q3 and lined up seventh and eighth on the grid and were in fourth and fifth at the end of the first lap. Points were clearly within our reach."

An aggressive recruitment drive, not to mention enticing Marcin Budkowski from the FIA, Renault must surely raise its game and target fourth in 2018, which no doubt explains the all-new car... and the recruitment of Carlos Sainz.