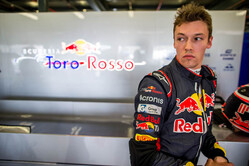 Red Bull's motorsport consultant, the all-powerful Helmut Marko, has confirmed that Daniil Kvyat's involvement with Toro Rosso is over.

"Kvyat will not return again," he told Auto Bild. "We do not believe he can make the turnaround in the long term.

"Gasly and Hartley are finishing the season," he added. "Then we'll see what happens."

Ironically, the Russian's 'firing' comes just days after an impressive drive in Austin, much like his departure from Red Bull came days after a podium finish in China last season.

Speaking in Austin, the Russian made it clear that he was as sick as anyone of the ongoing game of musical chairs at Toro Rosso and wanted to know his future.

"I think everything is possible to fix," he told reporters. "If there is a clear direction, a clear goal to fight for something big in the future, then I am more than happy to be part of this. If not, if my role will stay like this, one race you do, next race you don't know, then maybe it's less interesting.

"We have to sit down and talk about it and I think we will definitely have an answer," he said. "It will be a friendly talk, there will be no hard feelings."

However, not wanting any negativity from the talks to impact his performance, the Russian thought it best discussion was delayed until after the weekend.

"I don't want to know too much during this weekend," he admitted. "Here behind curtains many things are going on, always. It's not like I am always just sitting waiting. I'm obviously thinking about other things, but now is not the right time to talk about this. I have a long term agreement with Red Bull and as long as it is valid, I will try to do my job as good as possible. It might sound funny but I will stay loyal until we have a good talk together."

Well now he knows, and for the three remaining races Pierre Gasly will be partnered by a man who knows all too well how ruthless Red Bull and Marko can be in terms of hiring and firing, Brendon Hartley having been dropped as reserve driver and from the entire Red Bull programme mid-2010.

For Kvyat however, this represents the third time he has been dropped in less than two seasons, and if nothing else allows him closure and the freedom to look elsewhere.

At the same time, it allows Hartley (and Gasly) three more races in which to prove themselves."

Then again, with the Faenza outfit set to use Honda engines next season…