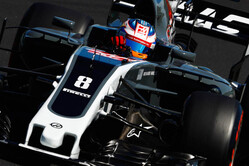 We don't recall who exactly came up with the expression that the 'only way to make a small fortune from Formula One is to start with a big one', but never was a truer word spoken.

The list of enthusiastic businessmen and entrepreneurs who have signed up to the sport in the belief that they knew something that their predecessors didn't is long, and one shudders to think of the billions that have been wasted over the years.

While Gene Haas readily admits that he entered F1 to promote his machine tools business on a global basis, deep down he was, like so many before him, hoping to make a difference, aiming not to follow the mistakes of others, and while a serious stab at the title was a pipedream, the odd Hesketh-style giant-killing was still possible.

Yet, just half-way into his second season, the American realises that unless he is prepared to at least triple or quadruple his budget, he is doomed to continue watching his team battle the likes of Toro Rosso and McLaren for the scraps, a bit-part player in a movie in which the stars are truly out of reach.

"I think we have two good drivers right now, they've both scored points, the car's very good," he told Motorsport.com. "But the real cloud that hangs over us is the fact we're one to two seconds off the fastest cars, and quite frankly we don't understand how we can be that far off with what we consider to be state-of-the-art equipment.

"Other than the top three teams, everybody's in that boat," he admits. "That to me is probably the biggest problem that I see right now, that the top three teams are light years ahead of everybody else. They are also the teams that develop their own engines, transmissions and chassis, so there's an inherent advantage in doing that.

"How do we overcome that? Quite frankly there's no answer to that, which is really depressing," he continues. "That's the dilemma that F1 is facing. You have the teams at the front and then this big mid-pack, we're all very close together, matter of fact the mid-pack is all within a second. So from a competitive standpoint we're all very equal, it's just you have this group way out in front that we're all struggling with.

"The reality of it is that outside those three teams nobody has a chance to win. If you're running sixth through 20th, you really don't have a chance of winning."