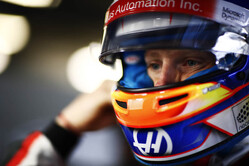 Grosjean set the 14th-fastest time in Q1 with a lap of 1:19.085 around the 4.381-kilometer (2.722-mile), 14-turn circuit to move on to Q2. Magnussen was 16th quickest with a lap of 1:19.095 and just missed cracking the top-15 to advance to Q2. In fact, Magnussen ran an identical lap time to 15th-quick Sergio Perez of Force India, but since Perez set his quick time prior to Magnussen, Perez was given the spot and final position in Q2.

Taking the pole for the Hungarian Grand Prix was Scuderia Ferrari driver Sebastian Vettel. His fast lap of 1:16.276 was the quickest all-time at the Hungaroring and .168 of a second better than runner-up and teammate Kimi Raikkonen. This was Vettel's 48th career Formula One pole and his second this season, and with Raikkonen qualifying second, it marked the third Ferrari front-row lockout of 2017.

Grosjean ran a total of 18 laps on the latter compound, split over eight-lap and 10-lap runs. He set the 15th-fastest time with a 1:19.622 on his 11th lap. Magnussen logged 15 laps on the supersoft rubber, comprising eight-lap and seven-lap outings. His best time of 1:19.895 was earned on his 14th lap and placed him 16th overall.

The top of FP3 was a prelude to qualifying, with Vettel setting the fastest time with a 1:17.017 that was .475 of a second better than next best Raikkonen.

Romain Grosjean: "I guess it's the best we could do. We both had to overdrive the car in Q1 and I managed to get through to Q2 where I tried really, really hard on the last lap. I couldn't quite get better than 15th. When we lose all of Friday with one car – actually we can say we lost all of Friday with my car as well – we just had too many problems. Things were going up and down and we couldn't really get anything, so it's very, very difficult. We need to improve as a team and get the car better from the first lap in FP1. If we're getting decent lap times there we can move forward. Here, we've just been struggling. I crashed on the first lap in FP1, so we've been in a very difficult position. I thought this would be the same as Austria and we'd be generating temperature in the tires. It's all related to tires and we're just not working them properly. What is the key? I don't know, but it's something that's not quite working."

Kevin Magnussen: "We haven't been competitive this weekend, for some reason. We were expecting to be okay here. We knew it wasn't going to be the best because of the slow corners, but at least it's a short, twisty track without big straights. We shouldn't be too bad in theory, but we haven't had the pace. On top of that, it's been a difficult weekend not doing Friday. Well, I did four laps on Friday and a few more this morning. It's not good preparation to go into qualifying. I made the most of it. I was only one hundredth of a second from Romain and I had the same lap time as Perez who was P15, so Q2 was right there. So with that little running, I'm quite happy with that."

Guenther Steiner: "Not ideal starting positions. I think after yesterday we've turned a little bit around. We couldn't get the full lost day from yesterday back, but everybody regrouped. We're 15th and 16th. We'd liked to have been further up, but we rescued what we could rescue over a short period of time. Tomorrow we'll try to move forward. I think this was one of our worst race weekends of last year and it looks like we're repeating it this season. Nevertheless, everybody is trying to get points."