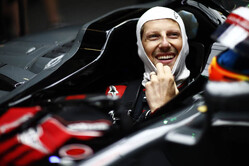 Haas F1 Team drivers Romain Grosjean and Kevin Magnussen qualified 10th and 17th, respectively, for the British Grand Prix Sunday at Silverstone Circuit. Magnussen, however, will start 16th after 13th-place qualifier Fernando Alonso takes his McLaren to the back of the field to serve a 30-place grid penalty.

Qualifying began in wet conditions, with light rain dampening the 5.891-kilometer (3.660-mile), 18-turn track enough that teams used the Pirelli Cinturato Green intermediate tire throughout Q1. Drivers tiptoed on the wet surface as traction was hard to come by. Grosjean eked his way into Q2 by securing the 15th fastest time with a 1:42.042. Magnussen did not advance, as his lap of 1:42.577 left him 17th overall and only the top-15 drivers get into Q2.

The rain abated in Q2, allowing the track to dry enough for a return to slicks. Haas F1 Team outfitted Grosjean's VF-17 with Pirelli P Zero Red supersoft tires and he used them to secure the ninth-fastest time with a lap of 1:29.966. The lap put Grosjean into Q3 for the second straight race and the fifth time this season. Only the top-10 drivers move to Q3.

Grosjean's Q3 time was a 1:29.549, which placed him 10th. An attempt to better that time ended when Grosjean was held up by eventual pole winner Lewis Hamilton. Grosjean lost three-tenths of a second to the Mercedes driver and the matter was referred to the FIA race stewards for investigation. Ultimately, the stewards determined Hamilton caused no infraction.

Hamilton's pole-winning lap of 1:26.600 set a new track qualifying record and was .547 of a second better than runner-up Kimi Räikkönen of Scuderia Ferrari. It was Hamilton's 67th career Formula One pole, putting him one shy of tying Michael Schumacher for the most poles in Formula One history. It was also Hamilton's sixth pole this season and his third straight at Silverstone, as well as his fifth career pole in the British Grand Prix, matching Jim Clark's record.

Both drivers utilized every dry tire compound Pirelli brought to Silverstone - the White medium, Yellow soft and Red supersoft - along with the Green intermediate tire when it began raining with 20 minutes left in the session.

Grosjean and Magnussen ran similar programs, with installation laps on the White medium tire followed by seven and eight-lap stints, respectively, on Yellow softs before a six-lap drive on Red supersofts. Each driver then made three laps in damp conditions with the intermediate tire.

Quickest in FP3 was Hamilton, whose fast lap of 1:28.063 was .032 of a second better than next best Sebastian Vettel of Scuderia Ferrari. Sauber teammates Pascal Wehrlein and Marcus Ericsson ran the most laps with 24 tours apiece.

Romain Grosjean: "I'm not totally happy with P10. The first run in Q3, I got completely blocked by Lewis Hamilton on the last corner losing me at good three-tenths. It cost me a least one position. With the second run I thought it was going to be fine, but I got to turn three and out of the blue I had massive rear-lock, so I lost almost half a second. I made it back over the lap, so I think we had much more performance than we were showing. I'm very unhappy with my first attempt being completely ruined at the last corner. Apart from all that, we were doing okay and doing a good job. It's great to be in Q3 but there could've been so much more, so I'm a bit disappointed."

Kevin Magnussen: "The car wasn't too far off in the wet from where we were in the dry. We are not as strong as we expected. We need to look at why that is and try and understand it. Our race pace looked much better, but in qualifying over one lap, it wasn't very competitive this weekend, which is a shame. The positive is that the race pace is good and that's what we need to be quick. We'll see what we can do."

Guenther Steiner: "Back to the roller coaster, back to the excitement. We had a good FP3 and we went into qualifying in good spirits. I think our car is competitive. With the rain starting it was a little bit of a lottery. One lottery we won, one we lost. Unfortunately, Kevin didn't make it out of Q1, but Romain made it into Q3. I think we were on a good roll. Then Romain got held up on his first set of tires by Lewis (Hamilton). On his second run, he had a small aero issue and locked up in turn three and that was it. We are starting 10th, which is a good place to start for points. I'm pretty confident with Kevin's skills, and the performance of the car on our long run, that we can still target points with that car as well."