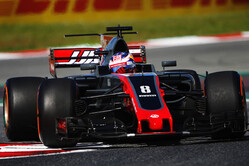 Haas F1 Team scored a point-paying result for the fifth consecutive race as Romain Grosjean earned a sixth-place finish in the Austrian Grand Prix Sunday at the Red Bull Ring in Spielberg.

The result marked the American squad's best finish so far in the 2017 FIA Formula One World Championship, and the eight points Grosjean delivered significantly bolstered Haas F1 Team's seventh-place standing in the constructors ranks. With 29 total points - the same amount Haas F1 Team scored all of last year - the sophomore organization opened up an 11-point gap over eighth-place Renault and cut the deficit to sixth-place Toro Rosso to just four points.

Grosjean started sixth in the 71-lap race around the 4.318-kilometer (2.683-mile), 10-turn circuit. A good start saw him climb to fourth on the opening lap, but the faster entries of Scuderia Ferrari's Kimi Raikkonen and Mercedes' Lewis Hamilton passed Grosjean within eight laps. Grosjean made his sole pit stop on lap 37 - switching from the Pirelli P Zero Purple ultrasoft tires to the Red supersoft compound. Resuming in eighth place, he was elevated back to sixth following pit stops from Force India's Esteban Ocon and Williams' Felipe Massa. Sergio Perez of Force India was in Grosjean's tracks through to the finish, but remained a consistent three to four seconds in arrears, leaving Grosjean untroubled as he took the checkered flag.

Teammate Kevin Magnussen was poised to join Grosjean with another points-paying effort, but while running 11th and just a tenth of a second shy of the 10th-place Williams of Lance Stroll, a hydraulic issue on lap 30 sent Magnussen to the garage. Magnussen had started 15th on a new set of Red supersoft tires and had yet to pit before his day ended prematurely.

Grosjean and Magnussen are now 13th and 14th, respectively, in the championship driver standings. Grosjean has 18 points and Magnussen has 11 points.

Winning the Austrian Grand Prix from the pole was Valtteri Bottas. It was the Mercedes driver's second career Formula One win, following his maiden victory in the Russian Grand Prix in April. Bottas' margin of victory was .658 of a second over Scuderia Ferrari's Sebastian Vettel.

There's no let-off on the Formula One schedule as the series immediately heads to the U.K. for the British Grand Prix July 14-16 at the famed Silverstone Circuit.

Romain Grosjean: "It was a really strong race. I had a really good first lap and was enjoying the racing for a little bit. Lewis (Hamilton) and Kimi (Raikkonen) got past, but I focused on keeping Sergio (Perez) behind. We pushed hard all the way and that's the racing we like. It was a great race and a great job by all the guys. I was happy with the car all weekend long. There are a few things we need to improve, but today we were the best of the rest. We showed that when we get everything to work on the car we're strong. It's the experience of getting everything working in the window all the time that we're missing a little bit. This was only our 30th race ever, so we can't have everything. I'm looking forward to the next race. Silverstone's going to be fun."

Kevin Magnussen: "It's pretty tough when these things happen. You're in a good position, the car's working really well, and it was our strongest weekend with the most potential for a good result for both cars. I could easily have been up there with Romain and we could've had a perfect result for the team. It's just been really poor luck this weekend. I'm hoping that we can keep our form up and have other races like this where we can have top results - like we should have had today. There's only a few days to wait then we're at it again, so I'm really hoping we can do well again."

Guenther Steiner: "Highs and lows. The good thing here was that we showed the pace of the car and we had a good race. Unfortunately, Kevin had a hydraulic problem. We need to look into what it was, but he was racing hard. Again, we were up for having two cars in the points, but we'll get there. Fantastic from Romain - he drove a calm, solid race and it was our best result of the year. We'll have some lows after this, but we'll enjoy what we've got and keep on digging for more points."