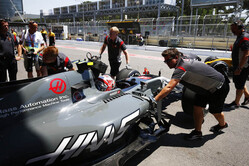 Haas F1 Team drivers Kevin Magnussen and Romain Grosjean qualified 13th and 17th, respectively, for the Azerbaijan Grand Prix Sunday at Baku City Circuit. Magnussen, however, will start 12th due to a three-place grid penalty being served by Carlos Sainz Jr. The Toro Rosso driver qualified 12th but incurred the penalty after causing an accident in the preceding Canadian Grand Prix in Montreal. And Grosjean will start 16th due to a 40-place grid penalty being served by Fernando Alonso. The McLaren driver qualified 16th but will start at the rear of the field after having to replace the turbocharger on his car for the seventh time this season while also introducing a new engine.

Before Magnussen, Grosjean and the rest of their Formula One counterparts participated in knockout qualifying, they had one final practice (FP3) to dial in their racecars for a quick lap around the track. Both drivers ran identical programs during the 60-minute session, with a double installation lap on White medium tires before switching over to Red supersofts in an effort to simulate qualifying.

Romain Grosjean: "I've been struggling with the feeling and struggling with the driving style. The tires are really hard to bite the track. It's been something I've been struggling with since Russia - where the tires are hard and the track is really smooth. I don't get any feedback from the tires on the grip and what's in the corners. I need to work on that and be better in these conditions. I just didn't find the right balance. It's going to be a long race and looking at all the practices, there's going to be a lot going on. Hopefully, we get a good race."

Kevin Magnussen: "It was a good qualifying considering our position this weekend. It's not been our most competitive track - perhaps the weakest track we've been to this year in terms of competitiveness. So to be P12, after penalties and all that are done, I think we should be happy with that. It's going to be a tough race tomorrow, but I'll do what I can."

Guenther Steiner: "I think to qualify 13th and 17th, which eventually becomes 12th and 16th once others serve penalties - I wouldn't have expected that after FP3 this afternoon. I would say we've put ourselves in a good position again to score points for tomorrow. That's what we'll try to do."