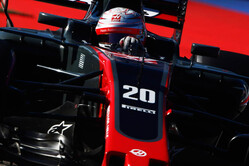 The eighth round of the 2017 FIA Formula One World Championship began with practice Friday at Baku City Circuit in Azerbaijan as teams prepared for the Azerbaijan Grand Prix Sunday.

Magnussen logged 23 laps in FP1 with his best time coming on his 19th lap - a 1:46.721 earned on a set of Pirelli P Zero Yellow soft tires that placed him 12th overall. Grosjean followed just behind his teammate with the 13th-fastest time - a 1:46.837 secured on the 15th of his 22 laps, also earned on Yellow softs. Both drivers started with a solitary installation lap on the White medium tire before switching to Yellow softs for the remainder of the session.

Leading the way in FP1 was Red Bull driver Max Verstappen, whose fast lap of 1:44.410 was .470 of a second better than the next quickest driver, teammate Daniel Ricciardo.

As drivers and teams refined their car's setups, times dropped in FP2. But with increased speeds came increased demands on cars' brake systems. Nowhere was this more evident than with Grosjean, who struggled with his brake balance throughout FP2. It all conspired to leave Grosjean 20th on the time sheet with 22 laps completed. His best lap was a 1:47.722 earned on his fourth tour using Yellow soft tires.

Magnussen, meanwhile, knocked down 33 laps in a productive session that placed him 14th overall. His best time was a 1:45.831, coming on his 13th lap while shod on Red supersoft tires.

Verstappen was again atop FP2 with a quick time of 1:43.362 that was .100 of a second better than next best Valtteri Bottas of Mercedes. However, FP2 came to an end when Verstappen spun into the barriers in turn one in the waning minutes.

Unlike past Friday practice sessions at previous grands prix this season where track records have fallen, the Baku City Circuit track record of 1:42.520 set by Nico Rosberg in his Mercedes during the second round of qualifying for last year's Azerbaijan Grand Prix stood. That is because the lower-downforce cars of the previous era produced significant straight-line speed and the higher-downforce cars of today aren't as quick in a straight line. Baku City Circuit has two enormous straights - a 2.2-kilometer (1.367-mile) mainstraight along the promenade and a 1-kilometer (.621-mile) stretch that takes drivers away from Azadliq Square. Despite the current-generation car being much faster in the corners, it hasn't been enough to balance the loss of straight-line speed, at least not yet.

Romain Grosjean: "A frustrating afternoon - the feeling just wasn't there. There's not really much I can say, to be honest. I just had no feeling in the car. That's obviously something that we need to look at a lot more depth as we've effectively lost a session heading into Saturday. Lots of work to do but, hopefully, we can focus and identify the issues and put it right."

Kevin Magnussen: "It wasn't too bad today. I think we had a decent day. There's a lot to look at. This track is pretty special and unique, so we'll see if we can improve the car for tomorrow. It's a very fun track to drive. There's a lot to take in and you're finding a lot of speed every lap. It's good to be able to do laps without too many problems on the car. I'm happy with the day."

Guenther Steiner: "We had a good morning session, but in the afternoon we struggled with everything a little bit. Between traffic, going straight, no feeling in the car - it's just like we have to start from the beginning. We need to see what changed between FP1 and FP2. A night of hard work is in front of the guys, but let's see what we can do tomorrow."