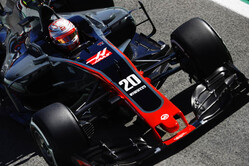 The 11th round of the 2017 FIA Formula One World Championship got off to an inauspicious start for Haas F1 Team with two difficult practice sessions Friday at the Hungaroring in Budapest.

The dual 90-minute periods - FP1 and FP2 - on the 4.381-kilometer (2.722-mile), 14-turn circuit were valuable to team's preparation for the Hungarian Grand Prix Sunday and both were run under warm and partly sunny conditions. But an early FP1 crash by Antonio Giovinazzi ended his session after only eight laps and damaged the left side of the car enough that regular pilot Kevin Magnussen was only able to drive his Haas VF-17 in the final 20 minutes of FP2.

Giovinazzi, the third driver for Scuderia Ferrari, took the wheel of the Haas VF-17 for a second straight FP1 session as the 23-year-old from Martina Franca, Italy, drove in FP1 for Haas F1 Team in the preceding British Grand Prix. Magnussen again relinquished his seat to allow Giovinazzi additional Formula One experience. This was the second of seven FP1 sessions where Giovinazzi will drive for Haas F1 Team. His quick time before the crash was a 1:22.251 on his eighth lap while riding on Pirelli P Zero Yellow soft tires.

Magnussen tried to make the most of his limited track time which became even more limited when Jolyon Palmer lost control of his Renault and spun in the final corner to bring out the red flag. This left Magnussen with only 12 minutes of total track time. He did the best he could with it, setting a fast time of 1:21.345 on his 10th lap using Red supersofts to place him 17th overall.

Leading the way in FP1 was Red Bull driver Daniel Ricciardo whose fast lap of 1:18.486 was .234 of a second better than the next quickest driver, Scuderia Ferrari's Kimi Räikkönen, and .05 of a second better than the previous all-time track record - a 1:18.436 set by Rubens Barrichello in his Ferrari during the first round of qualifying for the 2004 Hungarian Grand Prix.

Ricciardo remained fastest in FP2 with a lap of 1:18.455 that was .183 of a second better than next best Sebastian Vettel of Scuderia Ferrari.

Between the two sessions, Haas F1 Team ran a total of 64 laps - 45 by Grosjean, 11 by Magnussen and eight by Giovinazzi.

Romain Grosjean: "A pretty tough day for the whole team. We've been struggling with the balance all day. I think we can quote it as one of our worst Fridays since we started Haas F1 Team. We just need to put everything together and try to understand what the problems are. Obviously, we've had some issues today. We have to try to get better for tomorrow. It's not over yet, but we've certainly not made our lives easy."

Kevin Magnussen: "It's been a tough day not getting much out of the Friday sessions. I only got a couple of laps at the end of FP2 on low fuel. So, we don't have a great feeling for things at the moment but, hopefully, I'll catch up a bit tomorrow. For sure, it's going to make things a little bit difficult."

Antonio Giovinazzi: "The car had been looking quite good even in the short track time I had in the session. I lost the rear quite aggressively. It snapped on entry into turn 11. There was nothing I could do, to be honest. We're checking to see what happened. The track time is important for me. I lost out on 50 minutes of FP1, so I'm disappointed for myself, and also for Kevin."

Guenther Steiner: "A miserable day today. It must be our worst day since we started here a year-and-a-half ago. I don't know where to start with all that happened. We crashed two cars in FP1. One was pretty heavily damaged, but thanks to the hard work of the guys we at least got Kevin out so he could do a few laps. Romain's car was less damaged and he could get out, but we just struggled to find a balance. It's going from oversteer to understeer and we haven't found out why yet, so we keep on working. Hopefully, tomorrow we know more and do better and get back to our normal selves."