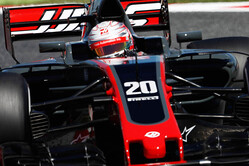 The outcome of the Hungarian Grand Prix Sunday at the Hungaroring in Budapest was seemingly decided on the first corner of the first lap of the 70-lap contest. For Haas F1 Team drivers Kevin Magnussen and Romain Grosjean, that meant finishes of 13th and 19th, respectively, in the 11th round of the 2017 FIA Formula One World Championship.

The tight and twisty Hungaroring puts passing at a premium, with the best opportunity to overtake coming at the first corner of the first lap around the 4.381-kilometer (2.722-mile), 14-turn circuit. This also increases the chance for contact, as all 20 drivers attempt to seize a full race worth of opportunity in one turn.

Both Haas F1 Team drivers actually moved up a position before the race even began. When 13th-place qualifier Daniil Kvyat was issued a three-spot grid penalty for impeding during the first round of qualifying on Saturday, it allowed Grosjean and Magnussen to leapfrog the Toro Rosso driver.

Magnussen started 15th and picked up two spots at the start - one by getting past his teammate and another thanks to the retirement of Daniel Ricciardo's Red Bull.

Magnussen ran a one-stop strategy where he pitted on lap 31, swapping the Pirelli P Zero Red supersoft tires he started the race with for a new set of Yellow softs that carried him to the finish. He picked up two spots to rise to 11th by overtaking both Renaults of Nico Hulkenberg and Jolyon Palmer when they pitted on laps 45 and 46, respectively. But while racing Hulkenberg late in the race, Magnussen pushed wide at turn two as Hulkenberg was on his outside. The move sent Hulkenberg onto the grass and netted Magnussen a five-second time penalty, which dropped him back to 13th at the conclusion of the race.

Magnussen was able to get by Grosjean at the start when his teammate banged wheels with Hulkenberg in turn one, sending Grosjean's Haas VF-17 wide and dropping him to 16th after starting 14th. This, however, would seem minor when a series of unfortunate events 19 laps later would ultimately bring Grosjean's race to an early end.

An unscheduled pit stop on lap 20 for a left-front tire puncture led to a cross-threaded left-rear wheel nut. With the left-rear wheel not completely secure, Grosjean was forced to stop the car on the track. His Haas VF-17 was pushed behind the barrier while officials delivered Grosjean back to the paddock.

Delivering the win was Scuderia Ferrari's Sebastian Vettel. The four-time Formula One champion won the Hungarian Grand Prix from the pole, leading all 70 laps to secure his 46th career Formula One victory, his fourth of the season and his second at the Hungaroring. The triumph also gave Vettel some breathing room in the championship. Vettel came into Hungary with only a one-point lead over his nearest pursuer, Lewis Hamilton, but leaves with a 14-point advantage.

Eleven rounds into the 20-race Formula One schedule, Haas F1 Team remains seventh in the constructors standings with 29 points, three points ahead of eighth-place Renault and 10 points behind sixth-place Toro Rosso. Grosjean and Magnussen stayed 13th and 14th, respectively, in the championship driver standings. Grosjean has 18 points and Magnussen has 11 points.

Nine races remain on the 2017 Formula One schedule, with the next event coming in four weeks with the Belgian Grand Prix Aug. 25-27 at Circuit de Spa-Francorchamps.

Romain Grosjean: "Not much to say about the race, to be fair. It was compromised at the first corner when I was hit. Then we had a puncture, and then we had a loose wheel, so we had to stop the car and not take any risks. When you have a tough weekend you then want to jump back in, get back on the horse. The break will be good for everyone, but we need to understand what we can do to avoid this kind of weekend."

Kevin Magnussen: "I don't really understand the penalty. He (Hulkenberg) didn't get anything for what happened at turn one when he smashed into the side of Romain, which finished his race effectively. I didn't even touch him. He could have chosen to back out, as I had the corner. I was on the inside and we were side-by-side. If anything, I was a little bit in front. I just chose my line. It's not like I moved off the racing line. We braked late, so it's natural you go wide and push on the entry. He put himself in danger on the outside. There aren't many positives to take away from this weekend. It's been a tough weekend in every sense. I'm sure we'll do better next time."

Guenther Steiner: "A tough Sunday to end a tough weekend to end the first half of the season. For the race, I want to see the positives first. Kevin fought hard and Romain, well there was a mistake on the tire change. The guys who change the tires are under a lot of pressure. It was the right place to happen. Romain wasn't happy with his car anyway. He was 15th, so there was nothing to be gained. If it's to happen somewhere, it should happen here. Kevin drove a fantastic race. He defended and got penalized. I don't fully agree with the penalty. It was very similar to what the same guy (Hulkenberg) did at turn one to our other car. In the end, it is what it is. We would've been 11th, which wouldn't have been in the points anyway. It happened. We need to get over it. It was a tough weekend. Now we go on a bit of a vacation and we come back again and get some points."