Massa: F1 has not got worse 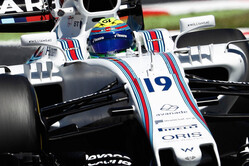 With 260 Grands Prix under his belt, thereby making him the sixth most experienced driver in the history of F1, Felipe Massa, who made his debut with Sauber in 2002, has seen numerous upheavals in terms of the sport's regulations.

Other than the various changes to the aerodynamic and tyre regulations, Masa entered F1 at a time of the 3 litre V10, continuing into the 2.4 litre V8 era and finally the turbocharged hybrid era that began in 2014.

Fans, already unhappy at the seemingly endless regulation changes, also insist that despite the claims of the powers that be, the sport has not improved indeed, many claim the sport isn't as good as it used to be.

A veteran of 15 seasons, with Sauber, Ferrari and Williams, and world champion for 38.907 seconds in 2008, Massa disagrees.

"In the moment that I started, overtaking was very difficult," he told Motorsport.com, "we didn't have DRS and everyone was complaining about the same thing. They said 'ah, we need to overtake', 'ah, we cannot follow the cars', 'ah, the top teams have more than the other teams', 'ah, it's too expensive'. What is different? I don't really see a big change.

"Maybe in that time, teams spent even more money than they are now," he continued, "but the gap between the best and the worst was huge, like it is now. This is F1. Hopefully it will change in the future, but I didn't see a big change."

The Brazilian also believes the challenge offered by the cars is the same.

"To be an F1 driver, you need to be the best and you need to take the best out of the car. It was always like that in F1, it hasn't been anything different from when I started to now. How things work is not so different."

All of which appears to bear out the general feeling among fans that the sport's powers that be are clueless, for most of the changes introduced, even since 2002, not to mention the enormous costs involved, have been with the intention of improving the racing, 'the show' as some call it.

Yet, 17 years down the line, a driver is admitting that little has changed and that the sport is essentially the same as it ever was, despite the promises and the huge sums spent.

Only a few days ago, F1's new boss, Chase Carey, suggested that standardising more parts would not only cut costs but also help improve the racing.

However, we all know the money saved by teams on standardised parts will only be spent on more aero tweaks which in turn will further compromise the racing.