Magnussen and Hulkenberg clash on and off track 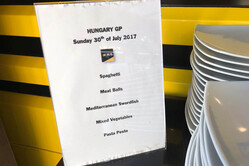 Perhaps it was the heat, or maybe the excitement of the impending summer break, either way there was definitely something in the air.

Be it Kimi Raikkonen's growing frustration at being stuck behind his teammate and put under unnecessary pressure from Mercedes, the clash of the Red Bull drivers the continued warring of the Force India duo and Fernando Alonso's banzai battle with countryman Carlos Sainz, despite it being a somewhat processional race there were little things happening throughout the field.

At the start of the race, Nico Hulkenberg made a move on Romain Grosjean that saw the Frenchman's Haas lifted off the ground and fly off into the run off area at Turn 1, though the Stewards saw this as a racing incident.

Later in the race, it was the German who was on the receiving end of an aggressive move, this time from Grosjean's Haas teammate, Kevin Magnussen.

On fresh rubber, the German, who had incurred a 5-place grid penalty after his team opted to change his gearbox, battled with Magnussen for 11th, but the Dane was having none of it.

Eventually, as he attempted to go around the outside of the Haas in Turn 2, Hulkenberg was forced off track and on to the grass resulting in brake and gearbox issues which caused him to retire three laps from the end, though he was still classified.

The Stewards were in no doubt, and along with a 5s time penalty, handed Magnussen 2 penalty points to bring his total up to 7.

At race end, as Magnussen was being interviewed by Danish TV, Hulkenberg, with press officer in tow, stepped up to the Dane and shook his hand 'congratulating' him on being "the most unsporting driver".

"I congratulated him for most unsporting driver of the whole grid once again," the German subsequently told NBC. "When it comes to racing, he's just nasty.

"Hard defending is fine," he continued, "but when he does this, it's just ruthless and sending people into the wall. What he did there, opening up the steering, making me run wide, it's just being an asshole basically.

"We had really nice words, he said 'suck my balls', that was his return, so it's quite interesting with him."

The German revealed that he intends raising the matter with (Race Director) Charlie Whiting.

"I'll go and speak to Charlie," he said. "I hear he (Magnussen) got a bit of a penalty, five seconds, but in his mind he won't care about that too much."

At the start of the race, Magnussen had a front row seat for the clash which saw Hulkenberg force his Haas teammate off at Turn 1, the Dane remarking to his team: "If you can do what Hulkenberg did to Romain, it's going to be a dirty race."

"Kevin drove a fantastic race," he said. "He defended and got penalized. I don't fully agree with the penalty. It was very similar to what the same guy (Hulkenberg) did at turn one to our other car.

"In the end, it is what it is," he added. "We would've been 11th, which wouldn't have been in the points anyway. It happened. We need to get over it. It was a tough weekend. Now we go on a bit of a vacation and we come back again and get some points."

Later in the evening, in a tweet entirely unrelated to the day's events, Renault posted a picture of its dinner menu. It's unclear if straws were provided.