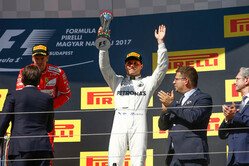 It was a gesture that grabbed almost as many headlines as Sebastian Vettel's drive to victory, certainly in the British media.

Unable to pass Kimi Raikkonen, in the final corner of the Hungarian Grand Prix, Lewis Hamilton slowed and allowed his Mercedes teammate, Valtteri Bottas, through to take the final podium position.

Earlier in the race, on older rubber, Bottas had been asked to move aside for Hamilton as the Briton felt he had a better chance of passing Kimi Raikkonen who had been told to hold station behind Sebastian Vettel who was suffering a steering issue.

While the pace of Hamilton's Mercedes allowed him to close up to the second Ferrari, the wake from the Red car caused the Briton grip and temperature issues. Mercedes difficulties were further exacerbated by an issue which affected radio communications between the team and its drivers.

Initially given five laps in which to pass Raikkonen, due to the ongoing radio issue, not to mention the fact that Bottas was now under pressure from Max Verstappen, Hamilton was given further time in which to take on the Ferrari.

At race end, unable to get close to Raikkonen, Hamilton slowed in the final corner, allowing Bottas to re-take third while still holding off Verstappen.

Though the gesture represented all that is good in terms of sportsmanship, the team was soon under attack on social media as fans claimed the gesture could ultimately cost the Briton the title, Sebastian Vettel's win having opened the gap to 14 points.

"We said that we would swap positions back if #LH44 couldn't pass RAI," tweeted the German team amidst the backlash. "We stand by our values as a team and Lewis is a man of his word!"

Indeed, it is a sentiment that Hamilton shares.

"I want to win the championship the right way," he told reporters at race end. "Though I don't know whether that will come back to bite me on the backside or not, I do think today was the right way to do things."

Asked if he had listened to his head or his heart on that final lap, he replied: "I think more from the heart, probably. The mind is more cut-throat and every point counts and this is do-or-die. My heart tells me the right thing to do was to let Valtteri past.

"I think today really shows, hopefully, that I am a man of my word," he continued, "and also that I am a team player. I am just as much a part of this team as anyone and I think we're working together better than we ever had, so I think today shows unity. In life, you do good things and good things do come round back to you.

"Slowing down seven seconds was tough," he admitted, "and I was nervous about losing a place to Verstappen but fortunately I didn't."

The gesture, not only cost Hamilton 3 points in terms of Vettel, but also allowed his teammate to close to within 19 points, something not lost on Bottas.

"When the gap was big I knew it could be a problem but in the end it was OK," he. "Not every team-mate would give the swap back if you are running for a podium place.

"I was getting a little bit worried," he continued, "I struggled with backmarkers, but thanks to Lewis to keep the promise and let me by because I gave him the shot to get past the Ferraris. The team promised that if I let him go we would swap back if he couldn't make it, and I am thankful we swapped again."