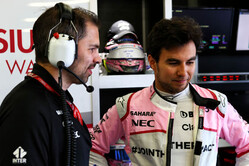 While the majority of the media focusses on the 'gloves-off' rivalry between title protagonists Lewis Hamilton and Sebastian Vettel, it is the building feud at Force India which could produce the real fireworks over the months ahead.

The frustration of Canada, where Sergio Perez refused to yield to his French teammate, was followed by a clash on the streets of Baku which resulted in an early bath for the Mexican when Esteban Ocon collided with him at the second re-start.

Keen not to spoil the show, yet aware of the potential consequences, Force India is refusing to institute team orders and is allowing its two drivers to continue racing, though insisting that there are no repeats of Baku.

Speaking in Austria ahead of this weekend's Grand Prix, it was clear that neither of the Pink Panthers sees an end to the feud any time soon.

"I think what happened in Baku was just totally unacceptable from the team point of view," Perez told reporters.

"I think simply Esteban has to understand what racing means," he continued. "Racing means just racing another car, not crashing into the other car. If you just push your team mate into the wall then that’s not the right thing.

"I expect him to be intelligent enough to understand what he did wrong and change a bit his attitude for the benefit of the team. In four years with Nico (Hulkenberg) we never had an issue and were free to race. We had big battles on track but we were always free to race. I think as along as Esteban understands what racing means then that should be clear.

Speaking at a separate media meeting, Ocon clearly saw things differently, as does the team, according to the Frenchman.

"After the race I took a plane to go to Silverstone to review the incident with the team," he Ocon. "They prepared some notes with what they thought and we came to the conclusion that it was a 50/50.

"It was not only my fault, not only Sergio's fault it was both of our fault," he continued. "There were things he did that were not right, there are things I did which were not right so overall it makes it a race incident and 50/50.

"I've been finishing more than forty single-seater races in a row," he said, when told of Perez' comments, "I am European champion and GP3 world champion so I don't think I'm really lacking experience either on racing or wheel-to-wheel fights.

"I'm not going to change my attitude," he insisted, "I think it's been working well since the beginning of the year with the team and the way we work. The only thing I think we will change is just to be careful on what we do when we race.

"We'll continue to race and it's going to be a big competition between the two of us all season long, especially because I will take more experience and feel more comfortable on tracks I know. But we just need to keep a fair fight and that's it.

"It's not going to change the work we have in the team because it's important that we stay professional inside and we have a strong job to do ahead of this season. I'm not afraid, I'm a competitor. But you can't make a stupid thing and I'm not feeling that I need to prove anything to keep my place in F1. I'm doing a strong job at the moment, I'm scoring almost at every race which is great, and the team is happy with my performances now at this moment so I don't feel pressure to be doing something."