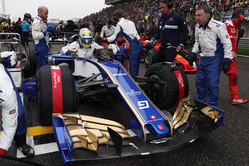 The Chinese Grand Prix ended in a disappointing result for the Sauber F1 Team. During difficult conditions, with light rain before the start of the race and low temperatures in general, Antonio Giovinazzi retired early on at the beginning of the race after an accident. Marcus Ericsson finished in P15, as the Sauber C36-Ferrari was not able to maintain the pace of the competitors under these conditions on the Shanghai International Circuit. The Sauber F1 Team will be on the way to Bahrain, where the next Grand Prix will take place the next weekend.

Marcus Ericsson: "I had a good start as well as a decent first lap. During the virtual safety car phase we were changing to soft tyres, even though we knew that the track was partly dry as well as still wet. After that, it was quite difficult. The conditions were tricky as well as the asphalt temperatures being relatively low, which made it difficult to get the tyres to work. Overall, I struggled with the tyres during the whole race - I never really got them into the right working window. Now I look forward to Bahrain."

Antonio Giovinazzi: "First of all, I want to apologize again to the team. They did a great job to get the car ready for the race. It was a shame that I crashed again today. A learning lesson - I just want to forget this weekend quickly."

Monisha Kaltenborn, Team Principal: "Today it was not our day - especially not for Antonio. We are glad that he is fine after the accident. The conditions were difficult, even more so without having much experience. For Marcus the race was also not easy, as we were just not able to keep up with the pace of the competitors - this race showed the weaknesses of our car. Now we focus on the next race weekend in Bahrain in one week."