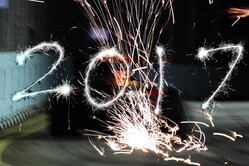 Pitpass would like to wish all its readers a very, very happy and prosperous New Year and a great season of racing in 2017.

With Mercedes having taken its third successive constructor and driver titles it would be easy to hope that things change in the coming year and that we see the German team put under sustained pressure.

However, as was our stance during the era of domination by Ferrari and Michael Schumacher, it is up to the opposition to raise its game, not for the leader to hang back or be handicapped by changes aimed at manipulating the desired result.

The much anticipated new regulations are more retro than new, and while we are delighted to see wider tyres it is disappointing that the sport still relies so heavily on aero grip rather than mechanical.

Yet this is a time for positivity, and other than the hope that the new rules will shake up the order, we have the exciting prospect of seeing young Max Verstappen further honing his undoubted skills, seemingly ticking off another box with each new challenge.

Despite the disappointment of Spain and Monaco, teammate Daniel Ricciardo was soon wearing his customary grin again, demonstrating to the world, and his precocious young teammate, that he will be no pushover. The Australian's love of the sport, his enthusiasm, is infectious, long may it continue and may other inhabitants of Planet Paddock learn from it.

Lewis Hamilton remains the benchmark, and few would bet against him securing his fourth title this year. Then again, perhaps he might have a teammate who can put him in his place on a more regular basis than Nico.

We had hoped for a Ferrari resurgence in 2016 but it never happened indeed, the Italian team slipped further behind. Sebastian, Kimi and race fans around the world deserve better, F1 needs the Maranello marque in the mix.

F1 also needs its icons, and as McLaren undergoes massive change, let's hope that the Woking outfit and engine partner Honda is able to give Fernando Alonso something with which to challenge. Two titles hardly does the talented Spaniard credit.

Will Williams rediscover its form, can Force India continue to be 'best of the rest', in the words of the classic TV show Soap, these questions and more will be answered over the coming months.

Other than new regulations, the sport faces massive upheaval as the old guard seemingly makes way for the new. With Ron Dennis quietly - and in our humble opinion cruelly - exiting the stage, all eyes turn to Bernie Ecclestone who has built this sport into what it is today.

It is easy for keyboard warriors to criticise the man for making a fortune from the sport as he took it forward but those of us who remember the sparse coverage it used to get, the ramshackle approach to the entry list and calendar, appreciate what a magnificent job he has done and continues to do.

That said, those that live in the past are doomed to repeat it, so let's hope that Liberty Media can pick up the baton and further improve the spectacle without demeaning the sport or trashing its history.

In a year which has seen countless heroes taken away from us, F1 didn't escape, as we said goodbye to Tyler Alexander, Maria Teresa De Filippis, Aki Hintsa, Paul Rosche and of course my own hero, Chris Amon.

Yet F1 is a sport forever changing, and while we said goodbye to Jenson Button and Felipe Massa*, we welcome Stoffel Vandoorne and Lance Stroll.

Due to Mercedes continued domination of the sport, interest has admittedly waned, some months seeing reader numbers fall by as much as 20% on 2015. However, thanks to Nico’s retirement, December traffic is up by over 40% on 2015 so let's hope it continues.

Ahead of what will be our sixteenth season of coverage, may we take the opportunity to wish you and yours the very best and hope that you will join us for what we hope will be a great season of racing... with added drama, rumour, tantrums, surprises and passion… smiles, speculation, sparks and seagulls.