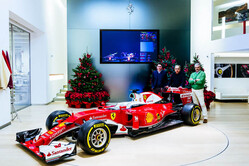 Ferrari's 2017 contender will take to the track at Fiorano on February 24, company president Sergio Marchionne has revealed.

Speaking at the team's traditional media Christmas lunch, Marchionne revealed that the - as yet undesignated - car will take part in a filming day at Fiorano just three days before the opening pre-season test gets underway at Barcelona.

"In 2016 we were made to look foolish by saying that we had caught Mercedes," he told the assembled media. "But after the strategic error at the first race in Australia we continued on a declining trend.

"The real problem was that we had not improved," he admitted. "Red Bull did instead.

"Now we wait for 2017," he continued. "I am sure the results will come, otherwise I will answer you and you can criticize me.

"The team is giving its all and has a great will to win." he insisted. "We have restructured and I prefer to look to the future in a different way. I don't regret the choices made, they were well thought out, so there's no need to change ideas.

"There are still many things missing, but the team is the team and it was put in place over a period of years and we're not about to change it now. Our working practice is already different to what it was back in August, which is when Mattia Binotto took over the reins. The organizational change was also partly made to bring some calm. Put in the work and the results will come."

Replying to journalists who suggested Sebastian Vettel is "demotivated", team boss Maurizio Arrivabene said: "With Vettel and Raikkonen we have two world champions on our books. Sebastian was here yesterday, working in the simulator and he repeated the fact that he wants to win with Ferrari. It's up to us to give them a car capable of doing that."

Talking about the 2017 car, Mattia Binotto said: "There are so many changes to the rules relating to aerodynamics. We will see cars that are much quicker through the corners, under acceleration and in braking. There is nothing to say that we here in Maranello cannot build such a car… It's just a matter of time.

"What we lacked on occasions this year was the ability to react quickly. We must be able to introduce new solutions before the others do."