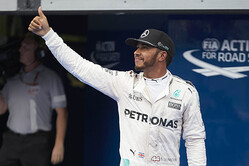 Ross Brawn believes Mercedes 2016 superiority will allow it to continue to dominate in 2017.

Mercedes finished 2016 with a 297 point advantage over nearest rivals Red Bull, just one point more than its advantage over the Austrian team in 2014, the first year of the new formula.

However, while in both preceding years Red Bull (in 2014) and Ferrari (in 2015) were able to respond with three wins, this year, the busiest season in the history of the sport, the Austrian outfit could only manage two and its Italian rivals none.

Such was its dominance this season, Ross Brawn believes this will have allowed the Brackley outfit to switch its focus to 2017 earlier than its main rivals and thereby ensure the Silver Arrows steamroller continues.

"Mercedes will have been pulling resource off this year's programme onto next year very early, once they saw where they were with the car," the Briton told the FIA's Auto magazine..

"If I was there, and I'm sure they've carried on a similar philosophy, I'd be saying, 'Right, we've got a strong car, we can only beat ourselves, let's get everyone onto next year's programme'.

"I don't know how many other teams could do that," he admits, and he should know. "Success breeds success. Mercedes will be strong next year, despite the greater emphasis on chassis."